January is traditionally a time for new beginnings and the month that employees are most likely to think about changing jobs following the Christmas break and a period of reflection. It’s interesting that the average person will change careers 5-7 times during their working life and, according to a Deloitte survey last year, 43% of Millennials will leave their jobs within just two years. For companies, this rise in ‘short-term’ employees necessitates efficient and comprehensive onboarding and offboarding processes. With the imminent arrival of new team members, onboarding is given its due diligence to ensure that they can start-off from the get-go. Unfortunately, this is not the case when it comes to offboarding where the redistribution of workloads to maintain productivity can often be prioritised over effectively managing the offboarding process.

From a business perspective, this may seem logical, however, it exposes the company to vulnerabilities particularly when you consider that it can take over a week to fully deprovision an employee’s machine and access credentials to applications and cloud resources. Remember, during this time, leavers may still have access to corporate resources that can cause severe reputational damage if misused. After all, a disgruntled former employee who leaves due to unexpected termination or to work for a competitor, can be a source of data security breaches due to lax IT protocols.

With incomplete offboarding as one of the most serious risks to a company, we conducted a survey to delve deeper and discovered that once an employee does leave, nearly half of IT professionals are only somewhat confident that they no longer have access to the organisation’s critical systems and information. In today’s on-the-go society, employees access work through company mobile phones and laptops – all of which need to be returned before they leave the company. In some organisations, this process can be cumbersome or easily forgotten, resulting in loss of assets and ex-employees retaining access to resources.

What’s more shocking is that over half of those surveyed know someone who still has access to a former employer’s applications or data. What terrifies companies the most? Well, almost 40% fear leakage of sensitive data, while over a quarter worry about cybersecurity hacks and a similar number are concerned about malicious data deletion or theft. 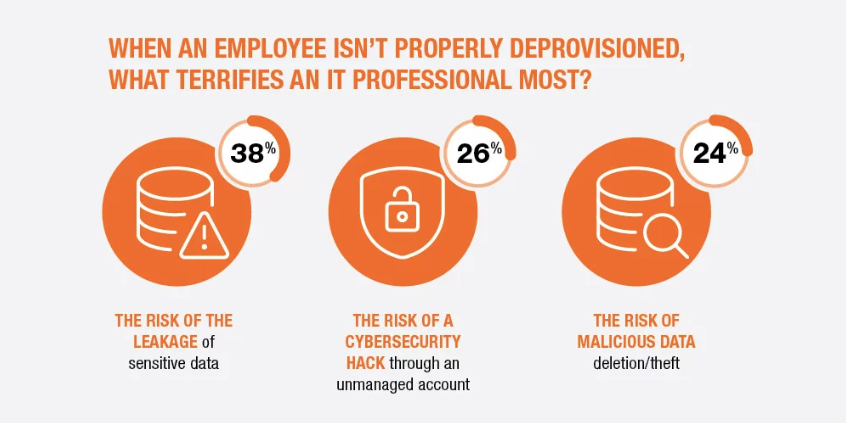 It’s not uncommon that ex-employees with an axe to grind can wreak havoc on purpose. On the other end of the scale, ex-employees with good intentions can cause equally as much damage by accident. The main culprit is shared passwords for communal accounts. Shared by word of mouth or saved on file, these are often easy to remember. Although an employee has physically left the company, they still have remote access to these platforms unless the password is reset during offboarding.

With these concerns stacking up you may wonder why organisations don’t implement a water-tight offboarding process. One of the reasons for this reluctance may be because in some companies offboarding is an extremely manual and time-consuming task, executed through a series of complex processes requiring multiple forms, putting businesses off from allocating the necessary resources. Although, as more systems move into the cloud, it’s essential that, alongside other departments, IT is included in the offboarding process from the start. How can IT teams overcome these issues? Well, automation is part of the answer.

An automated IT infrastructure takes the headache out of laborious tasks. Companies no longer need to dedicate hours to completing the offboarding processes or live in fear of missing a system. This significantly reduces their downtime and frees-up IT teams to focus on more impactful jobs that improve the performance of the business.

Find out more about how Ivanti can help you streamline your offboarding process here.