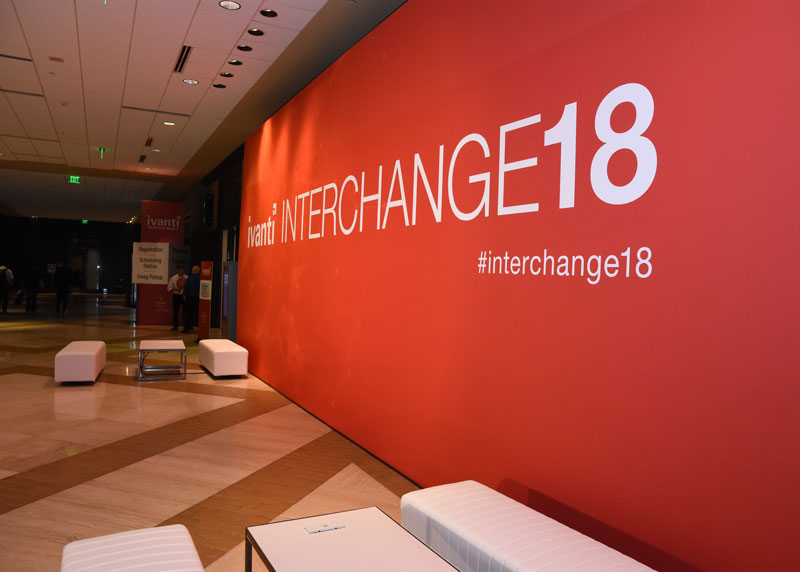 If there’s one thing we know for sure, it’s that social media shows life exactly how it is. No filters, no staging, and no faking it. Just 100% reality.

Ok, that’s not even close to the truth. Social media is a projection of the reality we’re all pretending to have, complete with editing, good lighting, flattering angles, and emoji-laden captions. Not to mention the thousands of people being catfished as we speak.

Despite all that, we think the #interchange18 posts were pretty genuine. How do we know? Well, we saw the attendees in person as well as on social media, and there was no difference.

Here’s a recap of the week’s greatest hits via social media.

As expected, Jason Lesko (@1EarEngineer and #ThanksNathan originator) brought his A-game to Twitter this year. He started the week out strong with a gif celebrating the lack of PowerPoints in our keynotes. #YoureWelcome

We had several comments from attendees about the strange collection of artwork and sculptures at the Hilton Anatole.

Draw me like one of your French girls. #Interchange18 pic.twitter.com/Uxh6brCpWO

The Berlin Wall was there, too.

So @GoIvanti I could not find any Executives. However, I did take a selfi with the Berlin Wall! I feel this supports unified IT, along with unity! Also, that selfi stick would really help me get the whole section! #interchange18 pic.twitter.com/xdW5s2QsJR

Pictures with executives were a big deal this year. These attendees got two executives in one picture.

CEO Steve Daly is always game to take a selfie.

@GoIvanti #interchange18 dont have a smart watch. Does this count pic.twitter.com/PNy5oNBwp6

Finally had the chance to try on all this fly @GoIvanti #Swag #interchange18 pic.twitter.com/Szl0kMvDNu

The more swag, the better.

My final @GoIvanti #interchange18 haul! Thank you to my new friends @JamieWinspearNC @1EarEngineer Jason Reed, and the best sponsors @mcglauninc @nine41consult .... So who is going to buy me a new suitcase to take on the plane???? pic.twitter.com/eyGcvjebIF

No, thank you, Butti!

It is time to THANK all the amazing Ivanti staff for the great organization and the good sessions. A special thank you to the developer and PMs and a big hug for Lisa! #interchange18 pic.twitter.com/3RO80pVIud

Partners even had birthdays during Interchange! Thanks for spending it with us.

Happy birthday Oleg! I'm sure ivanti has a FABULOUS gift for you! #HappyBirthday #Kaspersky #interchange18 pic.twitter.com/RYmJa4OTv3

One of our staff members also had a birthday.

We brought out an #interchange18 frame this year. Our staff got into it, too. Literally. Look at Steve Eror:

We used it to frame happy prize winners.

It wouldn't be Dallas without custom cowboy hats.

She wears it well!

This is called the smoulder.

#WomenInTech no longer stand by their men, they take charge and uhm lasso them #Interchange18 pic.twitter.com/jw60TKlzcu

A "Guess the Meme" game.

One of our social media rockstars, @1EarEngineer, in his element playing a "Guess the Meme" game with @swmorton01. #interchange18 #ThanksNathan pic.twitter.com/meWtSLlP4z

10,000 miles, lots of $ for Airfare to get to Dallas, acommodation and time spent. Seeing an Australian line dance on stage, priceless #interchange18 pic.twitter.com/liqXwe7rNh

Tweets showing up on the social wall.

You know you've made it when you show up on the social wall at #interchange18. We're looking at you, @SteveEror. pic.twitter.com/UvcHoIRawt

Eric Farlow's acting debut as a child on the show Dallas.

I want to find someone who looks at me the way #EricFarlow looks at his #lines @GoIvanti #interchange18 pic.twitter.com/cw31vekLGm

We pretty much all agreed that Pablos was awesome.

We also set time aside to give back to the community.

We made goodie bags for the children of the @TxScottishRite Hospital this week! #GiveBack #interchange18 pic.twitter.com/nw7abvfw6N

People enjoyed the conference booths, such as the Interchange IT Podcast booth.

And the Ivanti Insiders booth with Cache Walker.

Stop by the Ivanti Insiders booth tomorrow to see if I am really this short... Not everything’s bigger in Texas.#Interchange18 pic.twitter.com/clA7AGVYea

The Texas-themed party was a blast. Look at these smiling faces.

Some people even went back to the future.

Im going back... back to the Future with @GoIvanti at #interchange18 pic.twitter.com/gbYROEWcyn

And everything is bigger in Texas.

Everything is bigger in Texas #Interchange18 #ivanti pic.twitter.com/go453uo2nH

Do you think he's getting sun in his eyes?

But the highlight of the party was probably Steve Morton riding the mechanical bull... and then falling. And apparently splitting his pants.

And last but not least, this classic viral meme—Ivantified.

When other vendors try to get me away from @GoIvanti #interchange18 continues to blow me away pic.twitter.com/elh7ATE3HB

Thanks to everyone who tweeted and made Interchange Dallas our best year yet!

HDI Support World Live: Being ‘Live and In-Person’ Was Wonderful

Physical Events are Back! Ivanti is Excited to See You at Support World Live

That’s a Wrap on the Ivanti Partner Summit 2021!