The Best Tech Podcast: Unifying the IT World

Let's face it, IT podcasts can be boring. Technology podcasts are all over the place and everyone claims they are the best tech podcast. The Interchange IT Podcast is different. We want to unify and simplify the IT and tech world in an entertaining way.  On the podcast, you can expect interviews with IT experts from various countries and industries, hilarious IT horror stories and fails from our listeners, and career advice from successful IT professionals.

We also talk about the latest technology news and interview experts on topics like VR, self-driving cars, artificial intelligence, space exploration, and more. Our guest range has included journalists from The Verge to award-winning authors and documentarians. 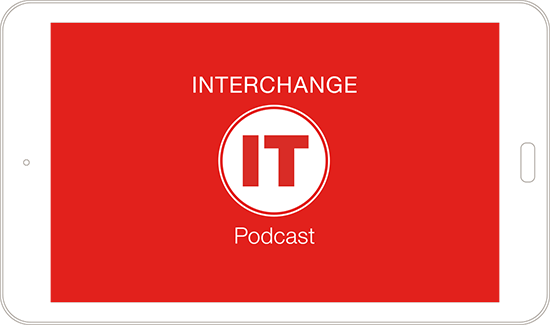 McKay Allen is a former TV news reporter and anchor turned marketer. Since leaving TV, he's worked for startups and big software companies. He loves technology… but in a totally non-nerdy way. His favorite episodes of the podcast to record are real IT stories and anything future-focused. When he's not working, he's probably spending time watching sports, playing with his kids, and working on his backyard.

Steve Eror has worked in both financial services, big data, artificial intelligence, and now IT software. His first taste of podcasting came with a financial radio show, where he was determined to make a normally dry subject entertaining. His favorite episodes of the podcast to record revolve around artificial intelligence, virtual reality, and other futuristic technology. For fun, Steve likes anything weird and offbeat. He's involved in rugby, professional paintball, fencing, blacksmithing, and is an avid drone pilot.

How to find us

You can listen to the Interchange IT Podcast wherever you listen to podcasts.
You can also listen through the Ivanti Blog.

Subscribe Now
A refreshingly (and surprisingly) entertaining and funny podcast on IT and all current business and technology related topics.
InfoSecFoodieiTunes subscriber

We want to hear from you

Be part of the Interchange IT Podcast community!