Windows Server 2016 Is Alive and Other Valuable Microsoft Ignite Takeaways

It's official: Windows Server 2016 is alive!

I spent a few days at Microsoft Ignite in Atlanta learning about what we can expect. OK, that’s not completely true. At AppSense, we’ve been following Windows updates closely for a year. But I did go to Ignite and learn a lot.

Here’s my take on what I see as the biggest news.

This will be huge… in time. Windows Server 2016 includes Windows Containers in in two flavors: Windows Server Containers and Hyper-V Containers. Microsoft delayed the release for a year to get both included, underlining their importance. Allow me to explain.

A Windows Server Container (like a Linux—a.k.a. Docker Container) separates inside the OS. It contains just enough OS to make it completely self-contained, but runs on a shared OS, even though it is isolated. Hence a container is much smaller (hundreds of MB vs. multiple GB) than a virtual machine.

A Hyper-V Container is a fascinating middle ground. It is essentially a special-purpose virtual machine. It uses hardware isolation to completely separate the container, and contains the Windows kernel, but is still lighter than a full virtual Windows Server VM.

This diagram from breakout session 3146 makes it much clearer than my text: 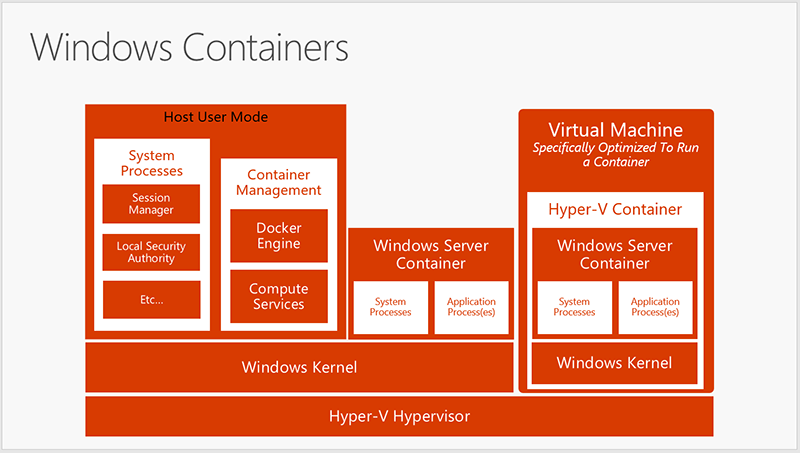 Nano Server is a super-light install option for Windows Server 2016, obviously designed for hosting Windows Server Containers and (in turn) services. The OS has gone on a massive diet (like 90 percent reduction!), only supports .NET Core apps (see helpful diagram here), and has no UI whatsoever; it’s all PowerShell. Also no Group Policy and no sysprep, by the way.

Anyway, the key thing is that Windows Server containers can run inside Nano Server. That gives you a lightweight OS running server apps that come self-contained and ready to go with everything needed by the app. Easy portability, high density, massive speed. And it can all be managed by the Docker framework. 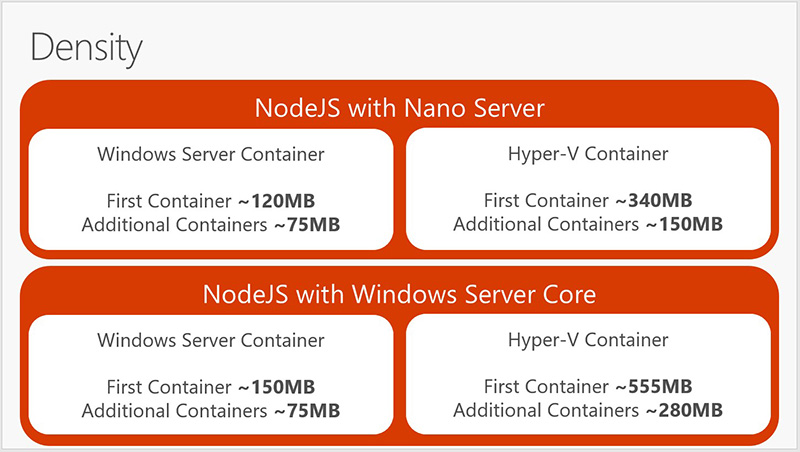 Get it yet? Microsoft is serious about efficient, lightweight hosting of private cloud infrastructure, and doing it in a way that makes virtual machines look clumsy, slow and expensive. Oh, and Windows Server Containers will run in Azure, so you get cloud portability too.

Taking a higher level view over all this, Microsoft never really did buy into the whole VM concept – why replicate so much garbage just to host a few apps more portably? The announcements around Windows Server 2016 and containers show their view of the future, and it doesn’t involve a lot of VMs.

Since the release of Windows Server 2008 R2, Citrix and Remote Desktop Session Host (RDSH) admins have been waiting for a Windows Server release with a desktop experience that won’t be rejected by their users – namely the Windows 8 start screen thing. After six years of waiting, the Start Menu is back, and Windows Server 2016 can be installed in “Desktop Experience” mode to give you published desktops, and, Citrix has excitedly announced “day zero” support for it with XenApp 7.11.

Note that XenApp 6.5 will definitely not support Windows Server 2016, so I predict a lot of major Citrix upgrades in the next couple of years, especially from those who have resisted version 7 until now.

So, why would you publish Windows 10-like desktops from Windows Server 2016 when you can publish actual Windows 10 desktops using VMs? VMs still come with more overhead and hence lower density and higher cost. However, Microsoft’s statement around their update and support policy is also a factor to consider:

What does this mean? Well, if you’re publishing desktops or applications from Windows Server 2016 you’re using the “Desktop Experience” option, which uses the Long Term Servicing Branch (LTSB) support model, and Microsoft is essentially going to service it like previous Windows releases on the “5+5” model – full support for 5 years, then extended support for 5 more. A lot of enterprises might like that!

To underline that Microsoft is going to treat you as if you are stuck in the past if you go this way, Windows Server 2016 with Desktop Experience does not support the new Edge browser, or indeed any Universal App (except the Start menu, apparently), and no Windows Store either. So if you’re “only” delivering Win32 apps like 99% of business customers, you’re in good shape.

This is very different from Windows 10, where Microsoft is steering enterprises very much towards CBB – Current Branch for Business—which will get a significant update at least once a year. Note that older branches are only supported for a year or two. In other words, if you go with Windows 10 you are going to be updating images and patching a lot more frequently. Windows 10 *is* available in LTSB too, but that’s really aimed at kiosk and vending machines/ATMs, and has the same limitations: no Edge, no Windows Store, etc…

By the way, there are a ton of great updates to Microsoft’s Remote Display Protocol and RemoteFX technology in Windows Server 2016 (and Windows 10), as well as to the RD Connection Broker. Benny Tritsch covers them, together with some video comparisons in his Ignite session, with the recording available here.

What does all this mean for AppSense?

At Ignite, we announced that forthcoming versions of the AppSense DesktopNow products (Environment Manager, Application Manager, Performance Manager, and Management Center) will support Windows Server 2016. With Windows Server 2016, Microsoft made significant changes to the OS and driver model. Those improvements gave us the opportunity to revamp and simplify all DesktopNow product code for a better, faster end user experience, with easier administration for IT.

Here’s an update on release status:

Just to reiterate, AppSense has supported Windows 10 since its first release, and we have continually patched our products to adjust to the continual changes and surprises that come with monthly updates. Microsoft is sending major changes in those monthly updates, like changes in profile handling and features like Credential Guard.

What about the other features in Windows Server 2016? Containers, Nano Server, Storage Spaces Direct, RDP enhancements? We are looking at all of them now. Delivering the Personalization Server and Management Server as Windows Server Containers is obviously appealing from a speed and efficiency point of view, but requires some changes in order to work with .NET Core. The RDP enhancements suggest more “bare” or “native” RDSH deployments, and we already support those. Watch this space for further updates as we research all the new goodness coming from Microsoft.