Update on AppSense Plans for Support of Windows 10 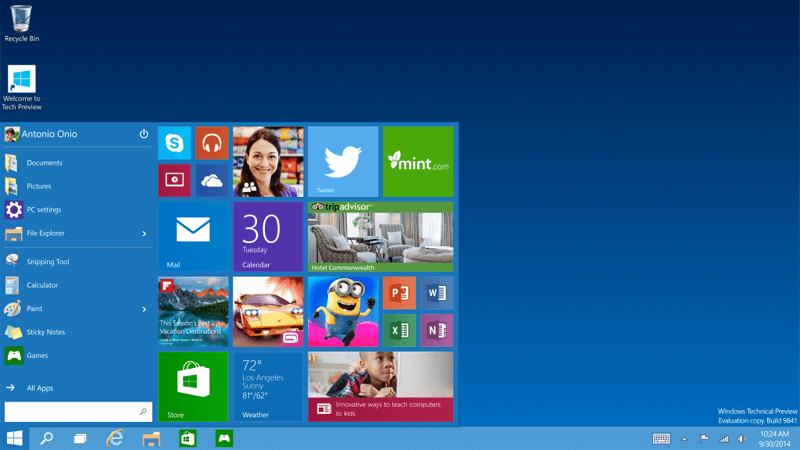 Since I wrote this article in January, we have seen many updates to the Windows 10 Preview and Microsoft has now announced an availability date (July 29th) for the Home and Pro editions of Windows 10. No dates have yet been announced for the Enterprise (volume license) edition used in most corporate environments and, in addition, Microsoft is planning more updates in the fall aimed at business, as it says here: “Starting this fall, customers can expect ongoing innovation and security updates for their Windows 10 devices, including more advanced security and management capabilities for businesses.”

[ UPDATE (20th Aug): Windows 10 Enterprise version was released on July 29th but without some of the enterprise features, and is also being patched and fixed weekly. We are expecting a major update in September or October which will add the promised Enterprise feature set and a more stable long term servicing branch. ]

So, with all that in mind, here are AppSense's plans to support Windows 10. First, I have to issue the usual reminder that all plans described here are subject to change in content and timing.

Following analysis of the latest Windows 10 features and the current Preview builds, we have come up with a 3-stage plan for Windows 10 support in DesktopNow.

The mechanism used to intercept Win32 application launches in Environment Manager (EM) and Application Manager (AM) does not currently work on Windows 10. Our plan is that this will be addressed in EM 8.6 Service Pack 1 (end July) and AM 8.9 Service Pack 1 (mid-June). We have been testing this fix with a number of internal testers and found that, once the new application trigger is in place, everything else works in the current Preview builds. Of course, it is possible Microsoft will make more changes to Windows 10 before it is released that cause this or other functionality to break.

So, we expect that these EM and AM SP1 releases will get all current functionality working as-is on Windows 10.

[ UPDATE (20th Aug): Both EM 8.6 and AM 8.9 SP1 have now been released and Win32 app process triggers, personalization and control are working on Windows 10. Updated Windows Personalization templates (WSGs) for the Windows 10 desktop will follow on AppSense Exchange soon although early users are reporting stability problems.

Windows 10 is now a maintained platform for all AppSense products.

However, there are some new features in Windows 10 which we need to support. The most obvious is the move of core Windows components and parts of the desktop into the new “Windows Apps” model, formerly known as Windows Store apps, aka Universal apps, aka Metro apps, aka Modern apps aka WinRT apps. In case you missed it, traditional Win32 apps are now branded “Windows Desktop Apps”, or in some Microsoft presentations as Legacy or Classic Windows apps.

In the current release of EM we can already personalize these new applications with Windows Personalization using Custom Windows Settings, which capture application settings at logoff, and re-inject them at logon. When EM 8.6 SP1 and AM 8.9 SP1 are released, look to AppSense Exchange for updated Windows Settings templates that support Windows 10 and Office 2016. However, we want to do better than that and put them on an equal footing with Win32 apps, so settings can be loaded dynamically at app launch and captured at shutdown. That leads us to step 2….

In AM 8.9 we introduced the ability to selectively block or allow Windows Store apps (as they were called in Windows 8.1) and we will extend this functionality further for Windows 10, especially since parts of the new Start menu, some Control Panels and other desktop components now use the new app model.

We will also be testing Performance Manager and Management Center against Windows 10 in the same timeframe, but it does not look like there are functional changes needed in those products at this time.

Windows 10 introduces new security options that highly restrict application behavior, and the kinds of applications that can be installed and run. Given how disruptive they will be to the typical enterprise Windows application portfolio we don’t expect to see these features enabled, but we have already begun research into what is required to support them and will respond to customer demand if we see a significant number of customers enable these options.

AppSense Insight works well on the current Windows 10 Preview builds, with the exception that it reports Windows 10 as Windows 8.1, and Windows 2016 as Windows 2012 R2. This will be rectified in the Insight 1.4 release in early July.

We are evaluating Windows 10 support for DataNow at this time. More information will follow in a future blog post, but there are very few changes needed to support as-is functionality, and numerous opportunities for tighter integration with new features in the updated Start menu and jump lists.

Wrapping-up, AppSense is excited by the new features and opportunities that Windows 10 brings to the business customer, and we will be there to support them. Together, our product suite makes it easier than ever to ensure a smooth, rapid migration of any user's profile, preferences, settings and data onto Windows 10.

Finally, we invite you to join the active discussion on Windows 10 support in the AppSense Exchange forum here.