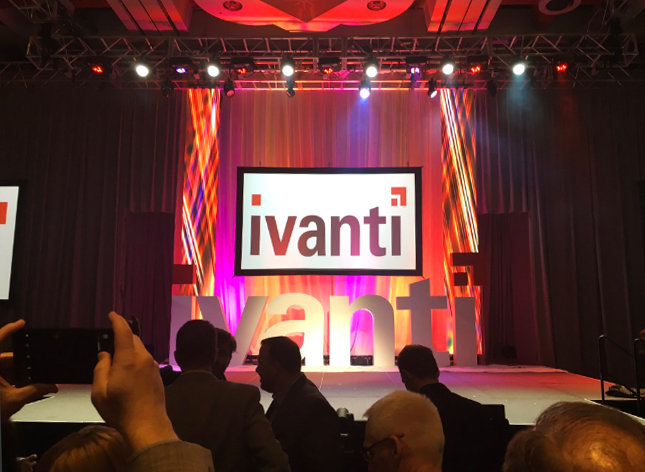 Observations of a Wallflower: Day 1 of Sales Kickoff 2017

I admit to living the life of a social wallflower over the years, especially at dances in junior high school. Yet being a wallflower has its advantages.

You become a people watcher—an “Ant Man,” a fly on the wall perfectly positioned to observe some of the world’s movers and shakers.

Such was the case at 8:15 Monday morning at the Salt Palace Convention Center in downtown Salt Lake City, the location of our company’s 2017 Sales Kickoff.

I had arrived at the center’s ballroom early to prep for the 9:00 a.m. “kickoff of the Kickoff.” I took my seat sort of front and nearly center to observe several of Ivanti’s movers and shakers—including president and CEO Steve Daly; Chairman John Ferron; Senior VP of Sales, Mitch Rowe; VP of Americas Sales, Andy Ruse; CMO Steve Morton; and CTO Tom Davis. They were collecting their thoughts, completing sound checks, and getting their game faces on for their pending presentations.

When the doors officially opened at 8:45 a.m., the pressing crowd transformed the ballroom from a cavernous quiet of nearly 1,000 empty chairs to full occupancy in under two minutes—the steady din dented occasionally by the unmistakable laugh of IT industry guru and content writer, Michael Dortch—“El Dortcho.”

By kickoff start time of 9:00 a.m., the behind-the-scenes preparations of months, days, and Sunday-night-to-Monday morning maneuvering was done. It was the A Team’s “I love it when a plan comes together” moment. It was show time—and what a show so far!

We’re now officially named Ivanti, with more than 1,600 employees, a gorgeous new website that was months in the making, a sales and systems engineering force that spans the globe, a professional services team second to none, and an increasingly integrated product portfolio that represents Where IT Goes to Get Work Done.

It was fitting that Steve Daly, the morning’s first speaker, humorously exclaim to all in attendance, “Give yourselves some applause for being big.”

And Steve Morton later touted that Ivanti is now the world’s third largest provider of IT service management software.

What stuck with me most however from the morning’s presentations were two statements made from Steve Daly:

1) That there were more employees seated in the ballroom than we had in the entire company a year ago.

2) The stability of the executive team over the years has been one of the keys to keeping the company surviving and thriving “since the Intel days” in a business environment of perpetual change.

I’m heartened that this fabric of proven leadership interwoven among the many brands and business lines that now comprise Ivanti—coupled with a corporate personality that cares for its employees and customers—will fortify the company to realize future growth and success.