Sometimes you can do a lot of things right, but still appear to have gotten it wrong. As I pieced together information regarding the Blackbaud data breach, it became clear they are doing many of the right things. Like many organizations, there are always too many priorities, too many projects, and too many shifting variables that allowed a sophisticated threat actor to launch a double-extortion attack.

Threat actors have found that ransoming the critical data isn’t enough. Now they steal the data then encrypt it, so they have double the leverage on the victim. In this case, the attacker was thwarted during the exfiltration of data so they were not able to get a second lever on Blackbaud by encrypting the data for ransom as well, but that was still enough to extort a ransom.

Blackbaud is an organization that appears to take security seriously. This quote from TheNonProfitTimes outlines their security focus:

“We follow industry-standard best practices, conduct ongoing risk assessments, aggressively test the security of our solutions, and continually assess our infrastructure. We are also a member of various Cyber Security thought leadership organizations, including: The Cloud Security Alliance and Financial Services Information Sharing and Analysis Center (FS-ISAC), where we team up with other experts to share best practices and tactical threat information for the Cyber Security community,” said the spokesperson.

The article goes on to talk about Blackbaud President and CEO Mike Gianoni’s response indicating Blackbaud’s security and operations teams were able to stop the attack as it was occurring—that they have analyzed the attack and have already taken measures to prevent this from happening again. From those steps you can discern some of the issues that led to the breach. They are enhancing their capabilities around access management, network segmentation, and deploying additional endpoint and network solutions to plug gaps the threat actors likely exploited.

It appears that Blackbaud did a lot of things right leading up to and post breach, but there are a few things that have come into question. First, Blackbaud paid the ransom. Law enforcement agencies around the globe urge victims not to pay ransoms. It incentivizes threat actors to continue and does not guarantee you will gain access to your data or that they will not target you again. Second, Blackbaud delayed their response to customers who fell victim in this case. There was a two-month delay in response to those whose data was affected. Under GDPR and other data privacy acts this is a significant issue. 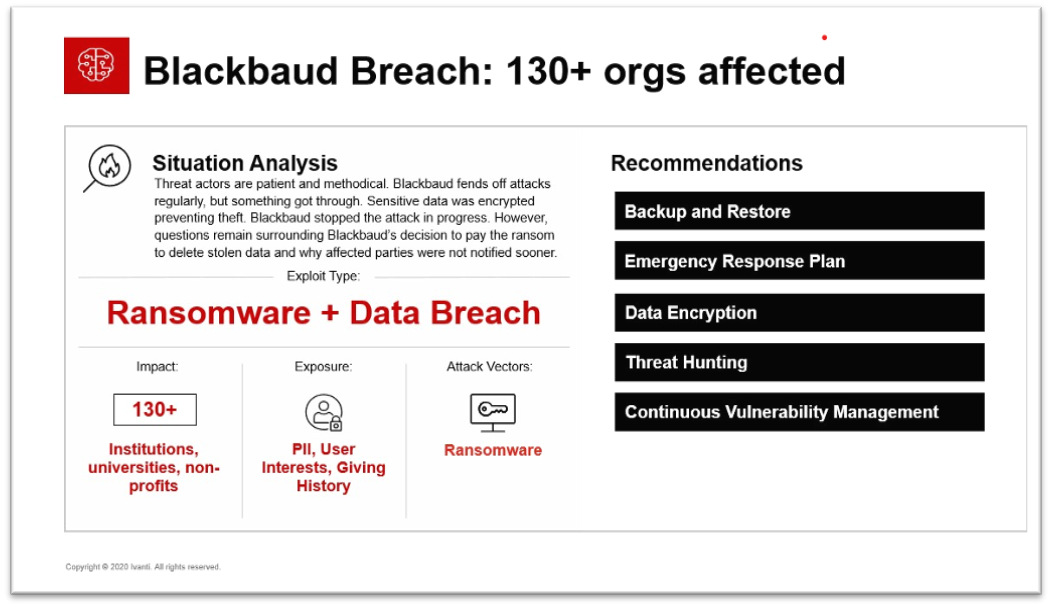 What should we take away from this incident?

Each month please join Ivanti CISO Phil Richards, and me, Chris Goettl, director of product management for Ivanti’s security solutions, for our Ivanti Threat Thursday webinars as we discuss the latest security-incident insights and trends.