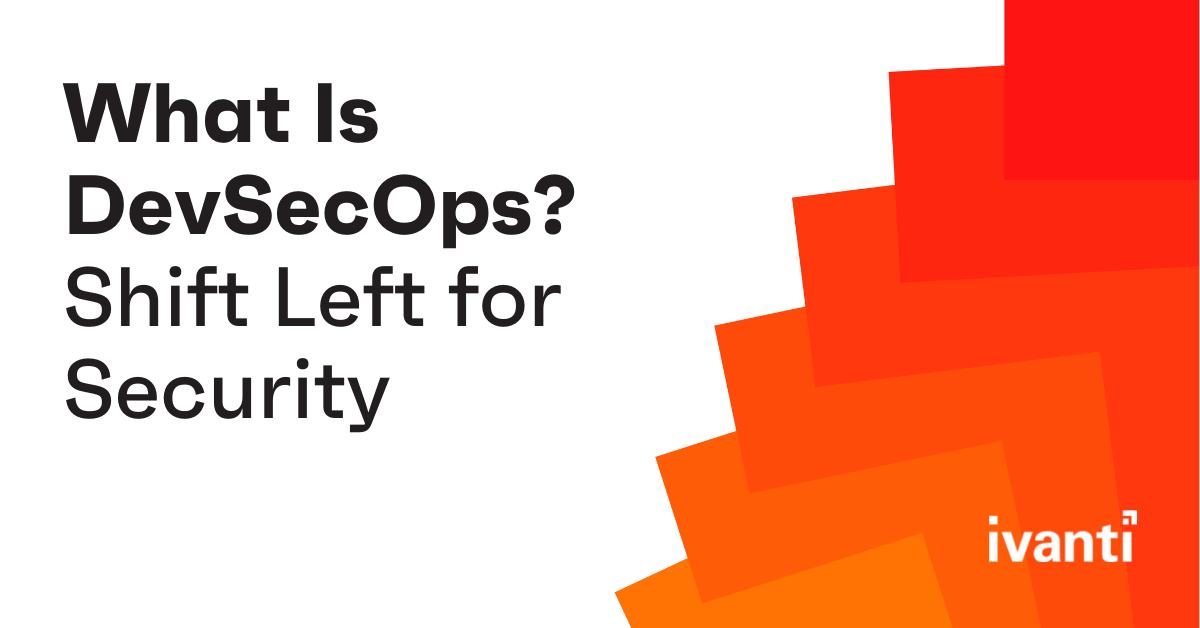 In the alphabet soup of IT buzzwords, DevSecOps is one of the more confusing abbreviations.

More than just a trendy buzzword, DevSecOps is the mature organization’s next evolution in comprehensive development processes.

The natural evolution of DevOps from traditional software development lifecycles

For context, DevOps – Development-Operations – as an integrated process philosophy gained momentum around 2008.

To meet market demand and internal deadlines, IT operations and software development needed to get code out the door faster. Products needed quick implementation without major roadblocks.

These faster deliveries led to a continuous development process through collaboration and automation, leading to today’s integrated DevOps process.

Why DevOps must shift left for security

The speed and automation of a modern DevOps process, however, can produce increased risk and more vulnerabilities and weaknesses.

In a traditional DevOps process, security assessments come at the end of the development process. This security-for-last approach:

So, organizations have begun to shift left – that is, proactively introduce security into the development lifecycle itself, rather than as a last-minute addition.

Despite its universally recognized importance, developers are understandably reluctant to take on security, as this added responsibility would impact their ability to push out new code.

Besides, developers are not security specialists. How can they know which vulnerability should take priority? Why should they be responsible for interpreting possible security risks of data without context?

Development isn’t the only process requiring increased security integration, either. The operations team must also be included in the new security prioritization, since operating systems, databases, web servers and other parts of the technology infrastructure frequently host many potential vulnerabilities and weaknesses.

Ultimately, DevSecOps is a fine balance between allowing development agility and speed, while maintaining a secure application and operational environment. This comprehensive, collaborative process requires awareness and automation between all three teams: development, operations and security.

There is no universal DevSecOps tool

Frankly, no one tool or solution will address the many diverse needs within a continuous integration/continuous delivery (CI/CD) pipeline.

DevSecOps covers too many different specialties and potential challenges to have a single technology or application that can cover all areas. As part of an effective DevSecOps protocol, an organization must implement:

Of course, this list is just the tip of the technology requirements iceberg.

Let’s not forget the many other sources of vulnerability information which must be synthesized, consolidated and acted upon. Inevitably, multiple data sources can cloud a clear understanding of urgency, impact and priority – if reconciled manually, or by a single application.

Ultimately, DevSecOps is not about a one-off tool or single point within the development process, but about automation, collaboration and integration.

After all, shift left is not just a term used to describe the process of developers alone thinking about security. Shifting left requires the entire team to consider potential vulnerabilities and weaknesses and risks from the very start of a project.

This shift requires scanning the code while it is in development and fixing issues as they arise as a regular, integrated part of the overall operation. Automated security testing should be executed in parallel with software development, incorporated during code review and added to acceptance testing criteria.

And, if security is to be included as part of general operations and development processes directly, then aggregation and prioritization of vulnerability and weakness data becomes vitally important. Developers and process managers should not need to become security experts to understand what’s important to fix, at which point in the development process.

Likewise, security experts shouldn’t need to know how to code the latest improvements to be able to communicate possible weaknesses within the code currently in review.

That’s where an organization’s tools and applications can greatly ease many of these implementation road blocks.

While DevSecOps has no one tool to cover every part of the process, organizations must have a strong tool set to track the work across teams and coordinate critical tasks to eliminate security weaknesses in code before they become public.

Development tends to use specific tools – such as Jira or Azure DevOps – to manage their workload. On the other hand, the operations team is more likely to use and reference a service management solution, such as Ivanti Neurons for ITSM. Security teams often have an entirely different suite of tools altogether, which may or may not integrate with their counterparts’ tech stacks.

For the organization seeking to bridge these different programs into a unified DevSecOps process, modern algorithms and tools offer all three teams an unparalleled ability to automate:

Many organizations implementing their DevSecOps process find that automating and centralizing this information into a universally accessible and integrated hub empowers all teams – development, operations, and security alike – to work on the right task at the right time while enabling cross-departmental measurement and reporting against key KPIs.

Finally, DevSecOps is about empowering collaboration across development, security and operations teams. For an integrated, shifted left process and lifecycle, all teams must understand the expectations across the board, with common reporting and KPIs.

Developers and operations staff must also receive training on security awareness, with the tools and processes in place to facilitate an early security focus. This transparency is key for a successful DevSecOps process implementation.

By empowering the teams to take responsibility for security through the DevOps lifecycle, DevSecOps allows development, security and operations teams to find and remediate security issues faster.