Survey Results: The Role of Shadow IT in Your Organization 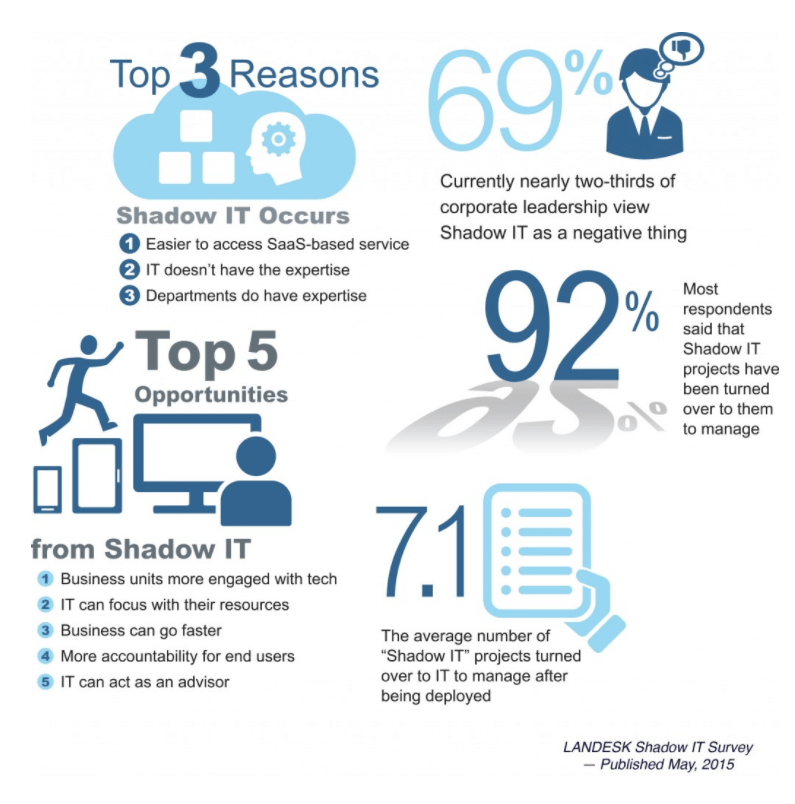 We performed a survey this spring around the topic of Shadow IT. We asked a series of questions to which more than 275 respondents gave us answers. The respondents were mostly made up of people who manage or lead IT groups (70%), with a little more than half of the people (53%) being directors or department heads.

There were a few data points that were surprising. The first surprise is that we expected that corporate management would be keener on getting things done, even if it means turning to Shadow IT solutions. However, the data showed that participants were nearly split within the IT ranks as to viewing Shadow IT as either negative (50%) or positive (45%).  Meanwhile, the view of their management is far more negative with only 23% being positive on Shadow It and 69% seeing it as a negative.

The other insights we learned from the survey can be encapsulated in a series of “Top Five” lists. The numbers shown indicate the percentage of total respondents that selected a particular answer. Here are four Top Five lists:

Top five things IT teams have done to overcome Shadow IT issues:

In summary, most business management views Shadow IT as a negative, while IT organizations receive the brunt of Shadow IT after it’s been implemented because they’re later expected to manage the Shadow IT solutions. Shadow IT projects take place because they’re easy to access and are often preceded by some constraint on or by IT. The most impactful ways to detect and resolve issues has to do with building stronger relationships with users and business units. Proactively investigating new ideas and presenting them to the organization will also go a long way in reducing the risks of Shadow IT.

We recommend closing the gap between what people expect to gain from Shadow IT and what they can get from their corporate IT by providing stronger support, a wide breadth of services, and a more intuitive user experience.