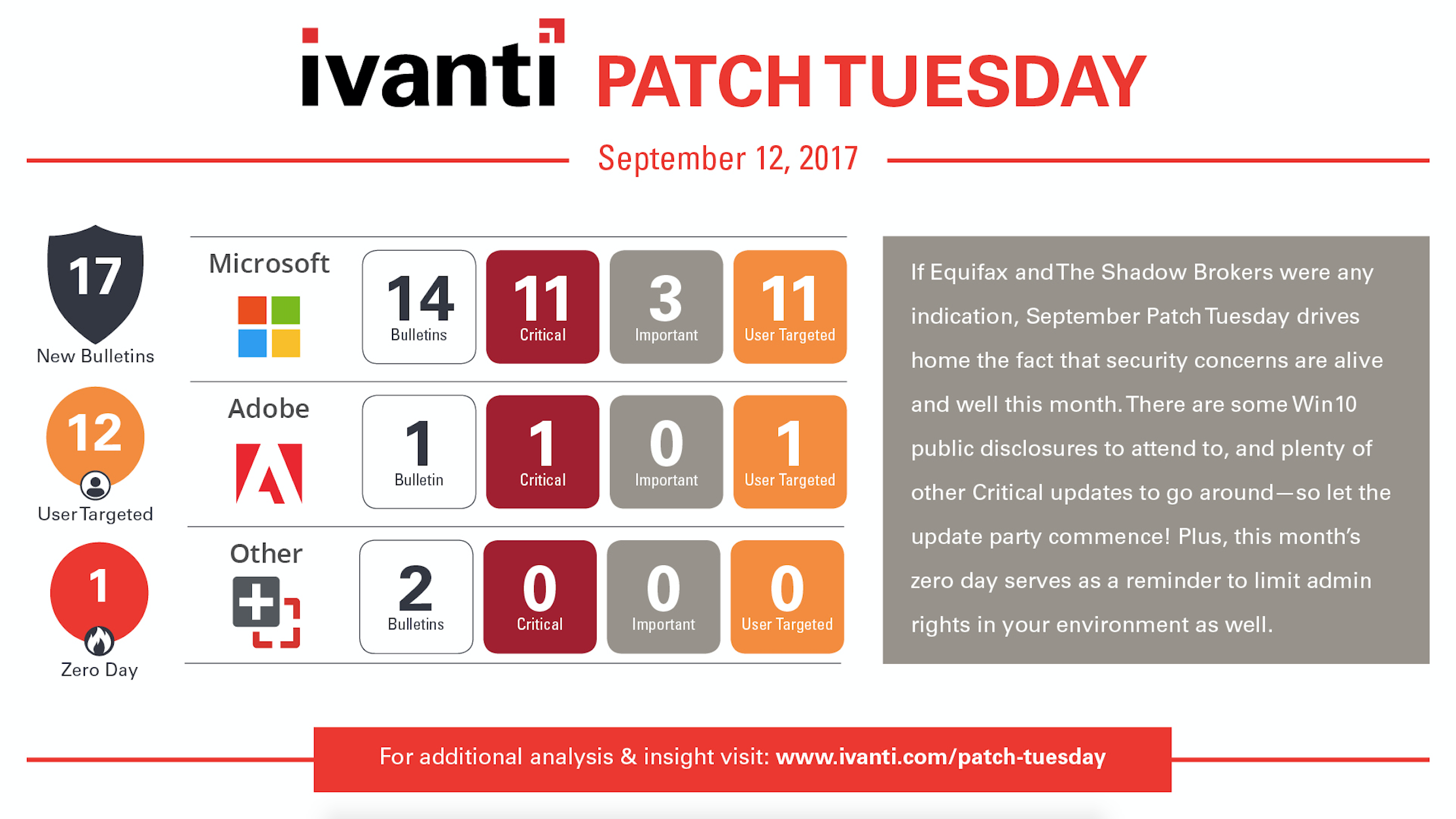 September Patch Tuesday is in and it brings a high CVE count along with some public disclosures and a Zero Day to be concerned about.  We also have a Flash Player update with a pair of CVEs needing some attention. In non-Patch Tuesday related news, there was the recent Equifax breach bringing the large-scale data breach to the top of the headlines with a bit of controversy and some storm clouds on the horizon with the latest teaser from The Shadow Brokers foreshadowing potential things to come. Also, read on for a bit of comic relief at the end in a series of security related news items that have come up recently.

Starting with Microsoft - September Patch Tuesday resolves 76 unique vulnerabilities across 14 total updates. As many as 11 of the 14 updates are rated as Critical and 3 are rated as Important.  There is one Zero Day this month and three Public Disclosures to discuss.

.Net framework has returned after a three-month hiatus. The last update we have seen for .Net Framework was back in May Patch Tuesday. This month’s update is rated as Important and only resolves one CVE, but that CVE is flagged as a Zero Day, meaning it was known to be exploited in the wild prior to this update being released.  CVE-2017-8759 is a vulnerability in Microsoft .Net Framework’s processing of untrusted input. This is a user targeted vulnerability, meaning an attacker could convince a user to open a malicious document or application resulting in their ability to take control of the affected system.  If the user is configured as less than a Full Administrator, the attack would be mitigated somewhat by only allowing the attacker to perform actions in the context of that user’s permissions, so least privilege helps here.  Open question as to why it is only rated as Important if it is a user targeted vulnerability and already known to be exploited.

The three public disclosures this month are all on the Windows 10 platform.  Two in the OS and one in the Edge browser.  While all three of these have lower exploitability index ratings, the fact that they have been Publicly Disclosed means a Threat Actor has enough information to potentially create an exploit.  Public Disclosures are a threat indicator to watch for as they are at higher risk of being exploited since some of the busy work of research and finding how to exploit may have been done for them already.

Let’s turn to some recent headlines:

There has been a lot of news around Equifax and the controversy around the disclosure.  There has also been a bit of news from The Shadow Brokers on new drops coming with a new set of tools. Equifax is a shining example of the Data Breach being alive and well.  The latest from the Shadow Brokers is a tool set that enables a Threat Actor with a perfect tool set to carry out an Advanced Persistent Treat.  If we merge the two topics we get Shadowfax.  I had a weird Friday afternoon and as I was reading the two of those back to back and there is where my mind went.

Continuing with a more lighthearted lineup of topics: