New Year, Same Challenges: Why in 2016, AppSense is still the only User Environment Management choice

With 2016 upon us, and 2015’s challenges becoming this year’s reality, I’m going to recap several 2015 hot topics and cover how to address them. This post will review Microsoft’s significant 2015 releases—Windows 10 and Office 2016, both now appearing in the enterprise—and the excellent value-add that AppSense adds to both 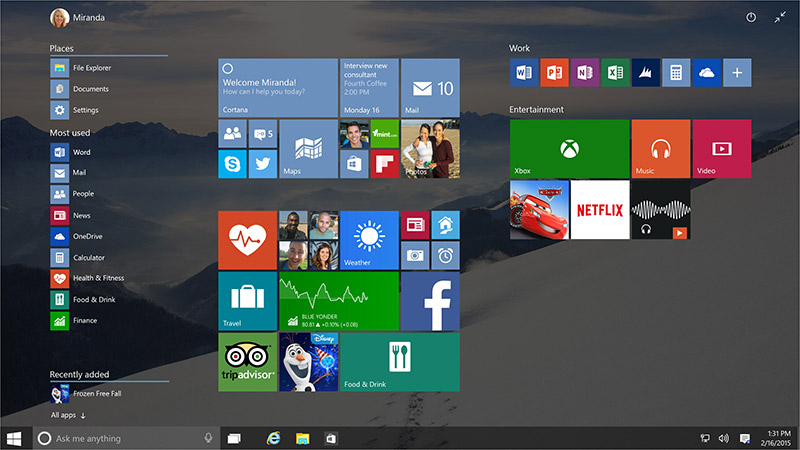 One of the common aspects of Windows 10 that organizations are keen to test is the user migration experience. Since the Windows 10 v5 user profile is incompatible with its predecessors, AppSense plays a significant role in delivering an uneventful (and even pleasant!) user experience during a Windows 10 migration.

AppSense has been at the forefront of enabling the enterprise to say Goodbye to Windows Migrations. In July 2015, AppSense released Service Packs for both Application Manager (AM 8.9 SP1) and Environment Manager (EM 8.6 SP1) to ensure that Windows 10 is a Maintained Platform (see here for our Maintained Platform Matrices). In late 2015, AM and EM further enhanced Windows 10 functionality with their respective Service Pack 2 releases, available from http://support.appsense.com.

Note: Customers can already roam User Credentials (Windows and Internet Explorer) and Certificates to and from Windows 10 desktops using Application Personalization without this Template.

One of the notable omissions from this Windows 10 Personalization Template is the Start Menu.  The humble Windows Start Menu has been through the mill at Microsoft of late, with Windows 8 abandoning it, Windows 8.1 resurrecting it in a limited form, and finally Windows 10 restoring it in an enhanced form. This enhancement at present is also it's 'Achilles Heel'—you can read about the native profile roaming issues that this New Start Menu design can introduce (still present in the latest Windows 10 TH2 release) by viewing the following article -  http://www.appsense.com/kb/150910053449235

Due to this underlying Microsoft issue it is not possible at present to personalize all the necessary Start Menu Tile Settings required, but AppSense understands that Microsoft will be resolving this problem by March 2016.

With an initial release in September 2015, Microsoft Office Suite is the first to be designed and built primarily for the Cloud and mobile world.  At present Office 2016/365 is available only in a “First Release” form. The current estimate is that Office 2016 will be generally available for Office 365 customers beginning in February 2016. (Similarly, an Office 2016 Branch for Business release is also scheduled for this time).

For customers using Office 365 Subscriptions and Online Services (such as OneDrive and SharePoint), it’s important to note that to use this template, a user's Office 365 Identity, Registration and Online settings need to be accessible outside of the AppSense Virtual Personalization Layer. The template accommodates this by utilizing our Windows Settings Group feature in a similar manner to how AppSense manages the Mail Profile (more on the increasing value of Windows Settings Groups in a later post).

AppSense is planning to include both Windows 10 and Office 2016/365 Personalization Settings (Out-Of-Box) in a 2016 release of Environment Manager. In the interim, we recommend that customers evaluate and test personalization using the Personalization Templates provided on AppSense Exchange.

Finally, it is interesting to note that Office 2016 is moving to the same Update Branch strategy as Windows 10, meaning that there will be 3 cumulative feature updates per year, in addition to Monthly Security Updates.  2016 is a changing time for the enterprise – in Microsoft's words: 'Admins - Get Ready'