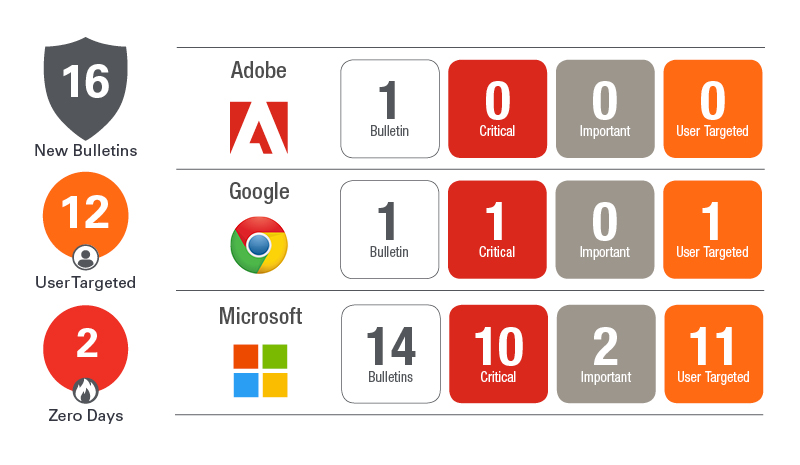 As March Patch Tuesday landed I happened to be in a room full of IT Admins talking about best practices for patch management. One of those best practices happened to be around ensuring you have good sources of data. While it looks like this month will not be an issue, in past months we have seen vulnerabilities that were only rated as Important but were actively being exploited. Our guidance to Ivanti customers is to not rely solely on vendor severity or even CVSS score as your only triggers for what should be deployed to your environment. Exploited, publicly disclosed, and user targeted vulnerabilities should also be taken into account.

For the month of March there are 64 unique CVEs resolved by Microsoft. Two of these have been detected in active exploits and four have been publicly disclosed meaning enough information has been made publicly available to give threat actors a jumpstart on developing exploits for them.

The Microsoft updates affect the Windows OS, Internet Explorer and Edge, Office (O365 appears to be non-security this month) and Sharepoint. It looks like we have broken the streak of .Net and Exchange updates we had seen for the past several months making it a lighter patch Tuesday, but still one with a bit of urgency and that urgency is around the OS and IE updates. Here is a breakdown of the Zero Day and publicly disclosed vulnerabilities.

On the non-Microsoft front there is an Adobe Flash update, but without any security vulnerabilities. Google Chrome dropped late in the day resolving 60 vulnerabilities. This combined with the Zero Day vulnerability (CVE-2019-5786) resolved on March 1st should put Chrome on the priority list this month.

Our guidance for this month is to get the Windows OS and IE updates applied as a top priority and make sure your Google Chrome update from last week is also applied as soon as possible. This will plug the three zero-day CVEs regarding the Win32k.sys Elevation of Privilege vulnerabilities being exploited in the wild and plug two of the publicly disclosed vulnerabilities.

IT Security: Thought Leaders’ Predictions for 2020