Lurking in the Shadows - Backing up PSTs with DataNow 4.0 ShadowSync

If you’ve been keeping abreast of recent advancements in DataNow, you may have seen my recent post about backing up PST files using Environment Manager and a collection of scripts to get DataNow to sync these files without running into some of the issues around copying in-use PSTs.

DataNow 4.0 introduces a new mechanism which makes using scripts or additional backup applications to sync PST files a thing of the past.

A Recap of the Problem

PST files are notoriously difficult to back up because they are locked by Microsoft Outlook while they are in-use, making it impossible to copy or sync them conventionally.

If you’ve ever tried to take a copy of an open PST file manually you will have seen a message similar to the following: 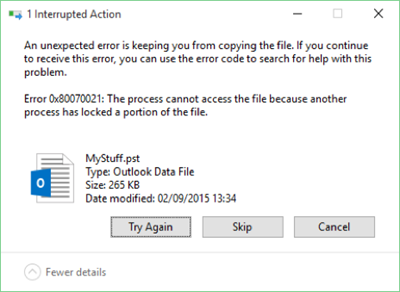 Sysadmins have struggled with this issue since the introduction of these files and often have to rely on archaic backup solutions which run at logon or logoff (when Outlook is closed) to back their users’ files up to network locations.

ShadowSync in DataNow 4.0 allows PST files, and other files with similar limitations, to be saved in DataNow locations and synced seamlessly, even while they are in-use by a user’s applications.

This mechanism works by monitoring PST files for changes and taking a snapshot of the files at times at which they’re not actively being written to by Outlook.

The combination of the way in which the snapshots are taken and the interval with which they are uploaded ensure that:

No configuration is required to enable this feature in DataNow 4.0; simply install and configure the Windows Client as usual to take advantage of fully backed-up PSTs.

If you’d like to tweak the interval at which PST files are backed up, you can do so by setting the ShadowSyncPeriod registry value, which is documented in the Advanced Config Guide.

If you’re tired of Microsoft’s restrictions around roaming PST files, or would like to replace your existing PST backup solution with something smarter, give DataNow 4.0 a try and see how easy and transparent the whole process becomes.