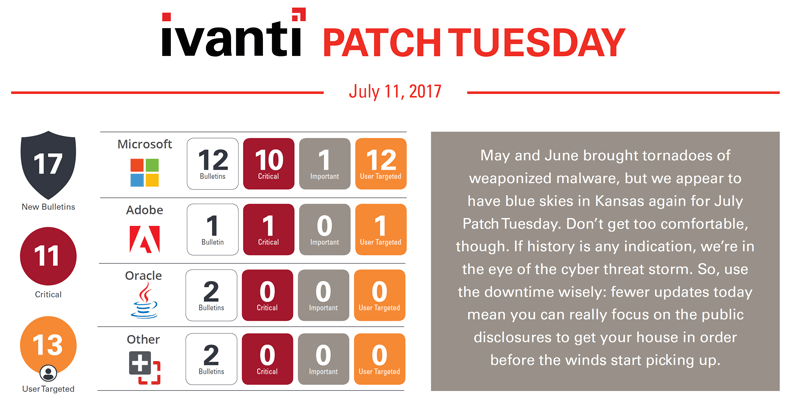 After the first half of the year July’s Patch Tuesday seems a little boring. There are a couple of things of interest, but overall, a pretty light round of updates. Depending on how you count them, there are 12 updates from Microsoft this month. Ten of the updates are rated as critical and one as important. We also have a moderate update for Exchange this month which has some interesting applicability notes to talk about. There were no zero days this month and also no updates released for XP or Server 2003, but there are four public disclosures to be aware of.

As expected, we also have an update from Adobe for Flash Player and Oracle will have their quarterly CPU, but that will actually drop next week on July 18. Just don’t forget about it.

All of the OS updates this month include some critical fixes and a few public disclosures, so regardless of if you are pushing the monthly rollup or the security-only bundle with Internet Explorer, they are all pretty much the same urgency. Let’s focus on the disclosures identified this month. A public disclosure is a vulnerability where enough information has been disclosed publicly for an attacker to have a jump start on building an exploit. In other words, the risk on a update that includes public disclosures is higher than another update of the same severity.

CVE-2017-8584 – Vulnerability in HoloLens which could allow remote code execution. This vulnerability affects Windows 10 1607 and Server 2016 and could allow an attacker to send a specially crafted wifi packet and take control of an affected system.

CVE-2017-8602 – Vulnerability in Internet Explorer 11 and Edge browsers parsing of HTTP content which could allow for a spoofing attack. The attacker could trick a user by redirecting them to a specially crafted website which could spoof content or serve as a pivot to chain an attack with other web services exploits. Attacks are user targeted and could take the form of phishing or watering hole attacks.

CVE-2017-8611 – Vulnerability in Microsoft Edge browser parsing of HTTP content which could allow for a spoofing attack. The attacker could trick a user by redirecting them to a specially crafted website which could spoof content or serve as a pivot to chain an attack with other web services exploits. Attacks are user targeted and could take the form of phishing or watering hole attacks.

If you have deployed the recently released 2013 CU 17 or 2016 CU 6 or happen to be on an earlier CU than either, the update will not apply. The update is rated as moderate, so a little less urgent.

Adobe Flash Player resolves three vulnerabilities this month. One of these is rated as critical and could allow remote code execution. Most importantly, you may need to update multiple instances of Flash on a system to fully resolve these vulnerabilities. There is the Flash Player install itself and if you have plug-ins for IE, Chrome or Firefox, those need to be updated as well. Some systems could have all four installed and in need of updates.

July is the Oracle CPU so keep an eye out next week for many critical updates from Oracle including Java JRE and JDK. This will drop on Tuesday, July 18.