Highlights from the #MySuperPower Women in Tech Campaign

Last week I spent three days at my desk with a massive smile plastered across my face. I couldn’t stop exclaiming with excitement and pure joy. Seriously, ask my cubicle mate. Every 10 minutes, I’d say, “Cuuuuute!” or, “OMG LOVE HER,” or just a simple, “Awh!” I even threw out an occasional, “YASSS QUEEN!” So what, I got a lot of weird looks last week, sue me.

Maybe I should explain. No, it wasn’t the email from my boss asking for the Google Sheet link I’d already sent him twice that was causing me to have such a good day (love you, McKay). I was smiling because I was riding the wave of female empowerment brought on by Ivanti’s #MySuperPower campaign.

SEE THE RESULTS: We polled over 500 women in technology to discover their insights into being a woman in tech.

Basically, the campaign was thought up by the leader of Ivanti’s Women in Tech campaign, Sarah Lewis. It brought a whole team of women together globally to meet and plan the campaign. The goal of the campaign was to encourage women in tech to recognize their own strengths and to celebrate the strengths of others.

Participating is easy. Just take a picture of yourself holding a card with one of your strengths written on it. Then post the picture on social media using the hashtag #MySuperPower.

A Look Into Our Super Powers

You can see all of the submissions by following the #MySuperPower hashtag on social media, but here are a few to get you started.

Meet our Den Bosch team in Amsterdam. They work in the previous RES software headquarters. From left to right, we have Claudia, Paulina, Moneik, Sabine, Helma, Denise, and Ginny. 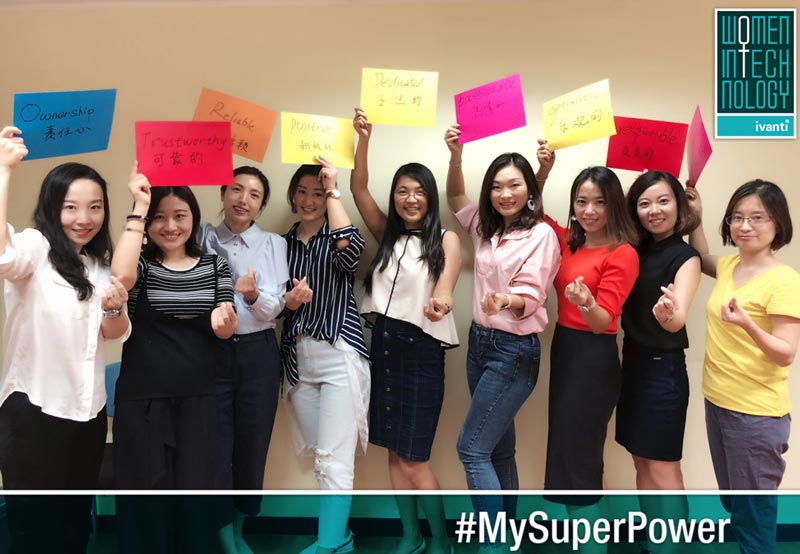 Next up is our Beijing team. From left to right, we have: Vivi, Catherine, Nora, Amy, Annie, Shena, Jessica, Flora, and Helen. 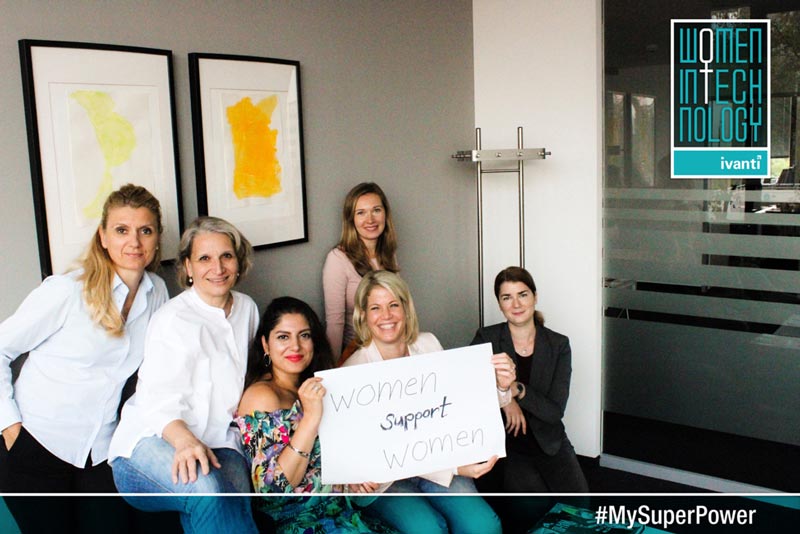 Here are the ladies from our Frankfurt, Germany office. From left to right, we have Gordana, Christine, Sabina, Iris, Olga, and Gilane. 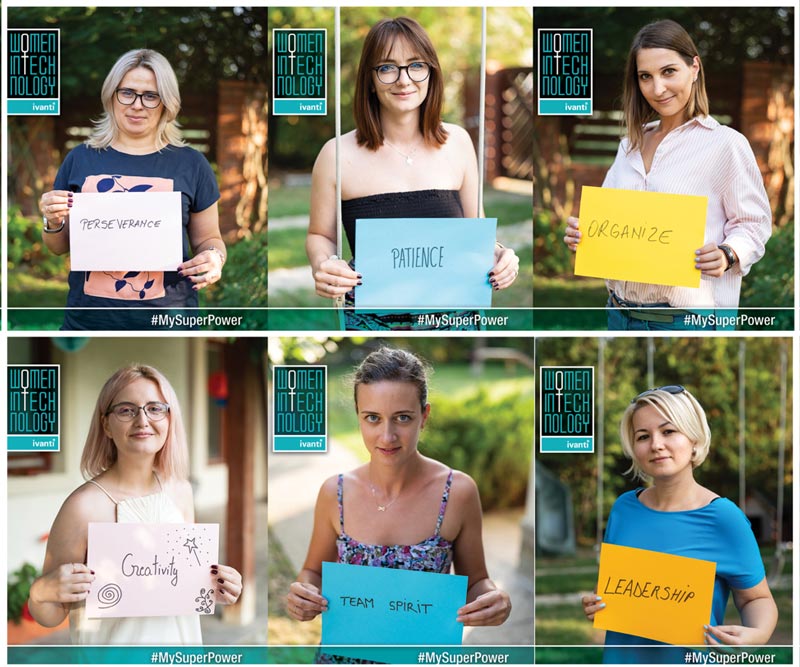 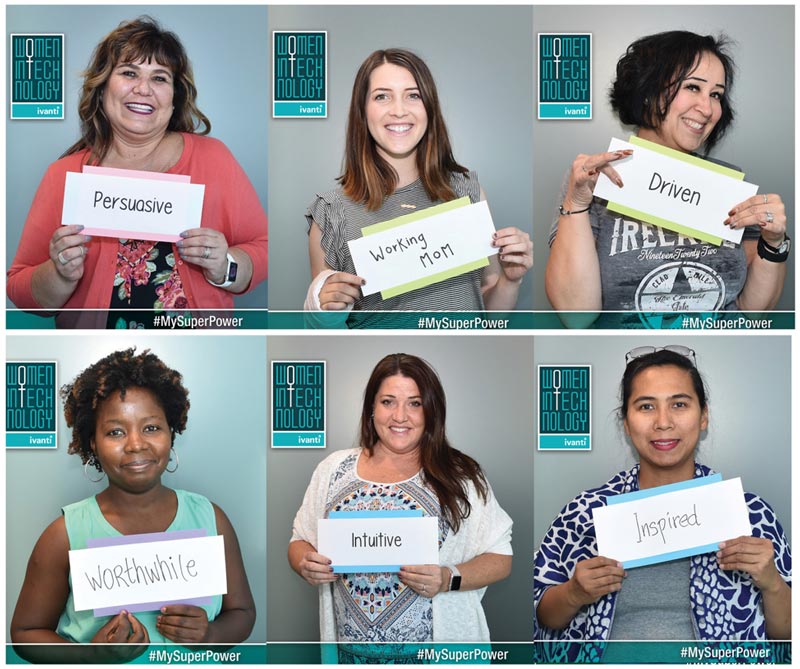 There have been so many submissions, it’s impossible to highlight them all on this blog post, but here are a few more we found on Twitter.

We're feeling inspired by the @TheTechieGirls #MySuperPower campaign here at @ox_it. Here are just a few of us holding our own super powers! What's your super power? #womenintech @GoIvanti @UniofOxford pic.twitter.com/pn2LzzSI2r

Feeling inspired by @TheTechieGirls' #MySuperPower campaign, so some of us at SDI got together to show off our own super powers! I feel very grateful to know and work with such amazing women @SDIRobyn @SDI_Samantha 🌟🦸‍♀️ pic.twitter.com/QVmtdNeN2S

Inspired by @TheTechieGirls campaign #MySuperPower is developing others and it is absolutely the thing i love most about my job. Shout out to all my HE IT Colleagues who inspire me everyday. What’s your super power? pic.twitter.com/nxp13zLHyn

Women in Tech, we all bring something great to the workplace. What’s your superpower? #MySuperPower @GoIvanti pic.twitter.com/MfdRwXO95R

At Say Communications, we are very proud to be part of the @GoIvanti #MySuperPower Campaign. @TheTechieGirls movement celebrates the unique and powerful strengths that #WomenInTech bring to the workplace. What’s your super power? #IvantiEmpowered pic.twitter.com/XMF1yLLazv

What I Learned from the #MySuperPower Campaign

As I looked at over 150 #MySuperPower submissions, I only thought, “Hmmm, she should have taken that picture at a different angle,” or “Wow, she needs more make up” once, and it was when I looked at my own picture. I felt a flood of positive emotions staring at the pictures of over 150 women, including being struck by how strong, beautiful, and talented they all seemed to be.

I heard similar feedback from other women, who loved the pictures as a whole but felt self-conscious about their own picture. I also heard from several women who struggled to figure out a strength to highlight but had plenty ideas of strengths for their female coworkers.

As women, we’re so hard on ourselves. Celebrating women from all over the world made me feel more confident. I was able to check that knee-jerk reaction telling me everything bad about myself. And that’s really cool, because we’re always facing that inner demon telling us we aren’t enough. This campaign helped build my confidence, which was a happy side effect I was not expecting.

Of the submissions, I only recognized 15 percent of the women in the pictures. Even though most of these women were strangers or names I’d seen on emails but never put a face to, I instantly felt so close with each woman. I thought, “Paige is a working mom, how cool!” or, “Kevin’s says she’s kind, she looks so kind, I can totally see it.” It made the world feel a little bit smaller as I scrolled through hashtag mentions from Toyko, London, California, Beijing, Poland, Colorado, and more. I’ve never felt so close to my fellow female coworkers and each woman that participated.

I wasn’t the only smiling in the office the day we kicked off the campaign. Everyone kept stopping by my desk all day to look at the new submissions. Women who didn’t want to participate in the office on the first day changed their minds about seeing the submissions and feeling the positive energy in the office. Since the campaign launched, we’ve received a steady stream of almost 200 submissions though social media and email. Everyone wants in on the female empowerment high.

To see all of the incredible submissions and join the women in tech conversation, don’t forget to follow @TheTechieGirls on Twitter and keep submitting #MySuperPower photos!