Happy 25th to Our Friends at Citrix 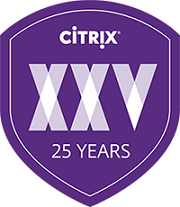 Citrix was founded 25 years ago today on April 17, 1989. If you put yourself in those times, before Windows NT, before x86 servers, and with networking in its infancy, the idea of delivering Windows or even DOS apps over the network probably seemed pretty out there.

Unlike many visionary ideas, which often arrive before their time and then fade while the rest of us try to catch up, the Citrix vision grew stronger and broader over time. It’s impossible to find a major enterprise computing shift over the last 25 years – from server virtualization to desktop virtualization to cloud computing to business collaboration to mobile – that Citrix hasn’t been right in the middle of.

Twenty-five years later, we don’t just see a multi-billion dollar company that touches tens of millions of users daily. We see a whole diverse ecosystem of people and companies that come together each day to make corporate computing work better. There are IT professionals who solve challenging real world problems in creative ways. There are thought leading independent consultants, bloggers, and value-add resellers who exchange innovative ideas and best practices around the globe. And there are vendors, including AppSense, who have followed Citrix’s lead in putting great technology minds to work to solve difficult enterprise computing challenges.

If you browse AppSense’s customer videos and case studies, you will see a common theme emerge: AppSense and Citrix working closely together to make desktop computing faster, easier, and less expensive at some of the world’s largest and most technically complex organizations.

A great deal of our company’s success would not have been possible without our partnership with Citrix. We’re extremely proud of the work we’ve done together, and we are even more excited by the shared successes that are still to come.