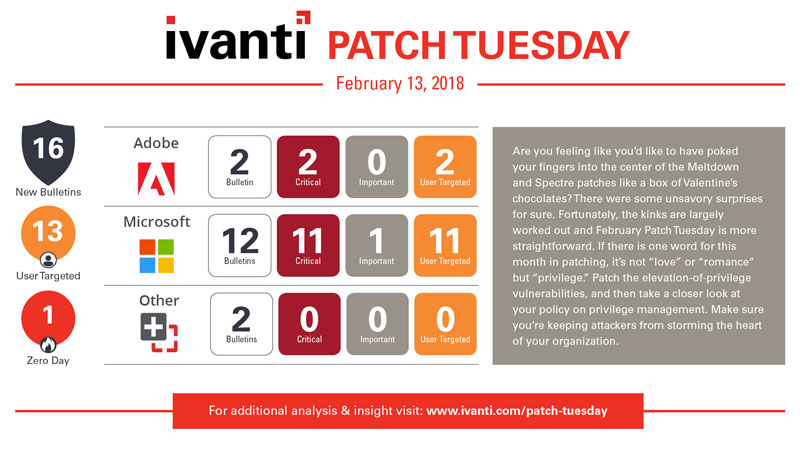 Microsoft has released a pretty typical lineup this month. All the Operating System updates, Internet Explorer, Flash for IE, Edge, Office, and SharePoint are accounted for in February.  There are a total of 50 unique vulnerabilities being resolved by Microsoft this month with one public disclosure. CVE-2018-0771 is a Security Feature Bypass vulnerability in the Edge browser that could allow an attacker to host a specially crafted website designed to exploit the vulnerability.  Compromised websites and websites that accept or host user-provided content or advertisements are also susceptible. The attacker could force the browser to send data that would otherwise be restricted.

Microsoft has resolved six office vulnerabilities this month including several that could allow Remote Code Execution. These vulnerabilities could be exploited through a hosted website, via an attachment in email, etc. If exploited the attacker would gain equal rights as the current user, so if the user is a full administrator, the attacker would gain full control of the system. This is a good example of why privilege management is so important. It is hard to take admin rights back from a user once granted, but there are other methods to take away specific capabilities to take some of the risk out of that full administrator user as well.  It is recommended to look into options to address this.

On the third party front, Adobe has released an update for Acrobat and Reader this month.  APSB18-02 resolves 41 total vulnerabilities (CVEs) and 17 of those are rated Critical, but the more concerning release from Adobe this month was the February 6th update to Adobe’s Flash Player that resolved a Zero Day vulnerability being used to target South Korea. CVE-2018-4878 was discovered in targeted attacks against South Korea since around mid-November 2017.  This and another Remote Code Execution vulnerability (CVE-2018-4877) were resolved in APSB18-03 last week.  Both Adobe releases should be top of the priority list this month.