In 1935, the Austrian physicist Erwin Schrödinger developed his famed thought experiment to illustrate the absurdity of quantum mechanics when you apply its principles to everyday objects. In his thought experiment, a cat is simultaneously alive and dead in a paradoxical quantum superposition, as a result of being linked to a random subatomic event that may or may not occur.. And, it was around this time that I decided quantum physics was not for me.

Yet, this topic came back to mind when I was recently reviewing the results of an Effective License Position in Ivanti License Optimizer. There appeared to be a couple of places where I had both a surplus and a shortfall of licenses for a particular software title. How could that be? What are these mysterious Schrödinger’s licenses?

It turns out—much unlike Schrodinger’s thought experiment—there are perfectly good reasons for this paradox in licenses. Let me explain.

You can check for this on License Optimizer’s Data Summary page by clicking the Product Information row for the software title, which shows the liability, number of licenses, and balance for each business unit. See the image below: 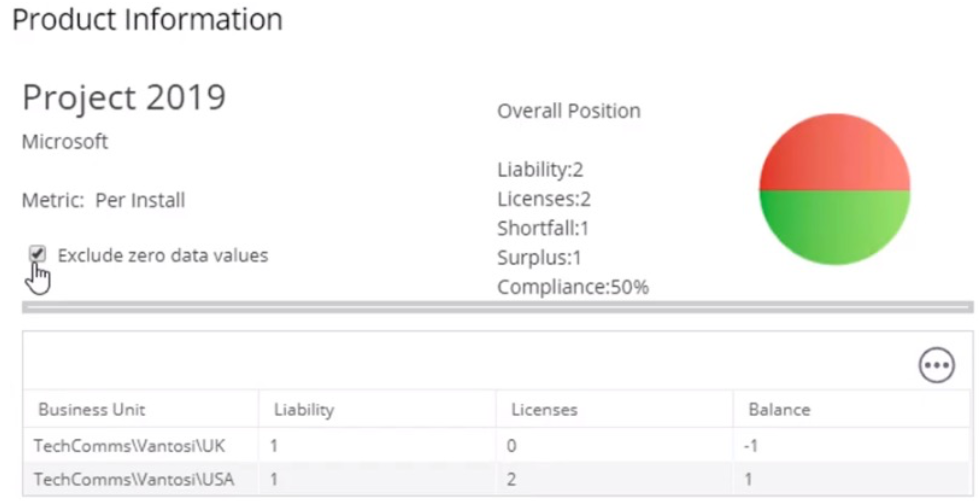 The other set of Schrödinger’s licenses I found related to another common issue, which comes about because you must completely cover your license liability on a server. You are either fully licensed, or not licensed at all. No partial licensing allowed. If your server needs 16 licenses but you have only eight, then you have a shortfall of 16 and a surplus of eight—you can’t claim to have a shortfall of eight  because you have eight unused licenses. You get no benefit from those additional eight licenses until you buy another eight to correct your liability.

You can check your software license balance using License Optimizer’s Software By Install tab of the Data Summary page, which shows each instance of installed software and its liabilities. To get a full picture, filter the data grid by software title, which then allows you to see the liability you have for each software installation. Remember, you need enough licenses to cover each server entirely.

In the image below, I have two servers that both need 16 licenses. If I have 24 licenses, then one server is licensed and the other isn’t, so I will have a surplus of eight licenses and a shortfall of 16:

Be sure to subscribe; we put out new videos featuring our products’ best practices.

How has the pandemic changed CISO priorities?