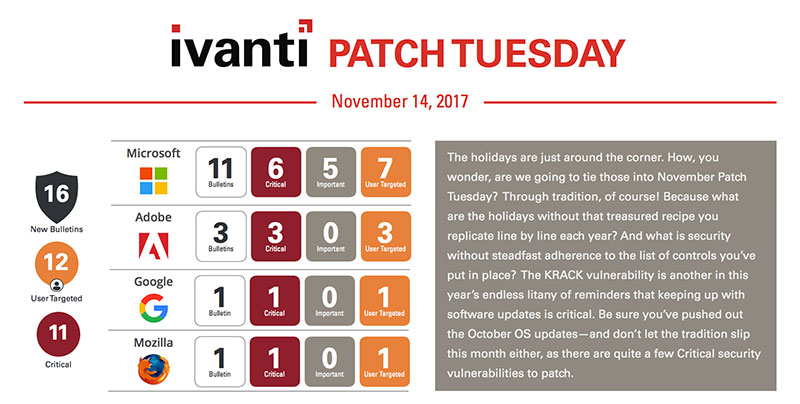 Microsoft’s Patch Tuesday update for November looks fairly tame. There are 47 total unique vulnerabilities resolved across 11 updates. Two of these have been publicly disclosed, which means enough information has been released to the public to allow a threat actor to create an exploit or at least give them a jump start on where to begin.

Following are some Indicators of Risk you can use to prioritize where to focus your attention. To start, both CVE-2017-11827 and CVE-2017-11848 affect the Microsoft Browsers. CVE-2017-11827 affects both IE and Edge. This vulnerability could be used in a phishing email or an exploiting website to convince a user to open a malicious attachment or content. Once exploited the attacker would gain equal rights to the current user. If the user is a full administrator the attacker would gain control of the affected system. The second vulnerability (CVE-2017-11848) is an information disclosure vulnerability in Internet Explorer that could allow an attacker to track the navigation of the user leaving a maliciously crafted page.

We also have a bit of Zombie action left over from Halloween. Both Microsoft and Adobe have End-of-Support products coming back to life! Windows 10 1511 gets a revival for Enterprise and Education editions for the next six months (April 10th, 2018 is the new end date for those editions). Home and Pro users not included; you should still upgrade to a later branch ASAP. And Adobe had announced End-of-Support for Acrobat and Reader XI last month on October 15th, only to  release an update this month! Adobe has nine total product updates this month and many Critical security vulnerabilities being resolved. One thing to note is many of these updates may be rated as a Priority 2, but this means it has Critical vulnerabilities, just none actively being exploited or disclosed at this time. Ivanti recommends any Adobe Priority 2s get resolved quickly, especially for Flash Player.

All of the major browsers need updating this month. IE, Edge, Mozilla Firefox, and Google Chrome all have released updates with many critical security vulnerabilities so make sure they are all on your priority list. Adobe has released nine Security Bulletins this month, most notable are the Flash Player, Acrobat and Reader, and Shockwave updates which all have Critical security vulnerabilities.

Finally, we are in the holiday shopping season now and there will be plenty of opportunists out to take advantage of the KRACK vulnerability in Wi-Fi WPA security protocol. Pretty much any Wi-Fi connection using the WPA or WPA2 encryption could be exploited. This means an attacker could eavesdrop on your connection and gain access to sensitive information including username\password, credit card info, or any other PII being transmitted over the Wi-Fi unencrypted. This vulnerability has already been resolved in last month’s Microsoft update, so be sure you have pushed out the October OS updates. Also, your phones, routers, hotspots, even Wi-Fi enabled IoT devices are likely exposed to this vulnerability, but more importantly all the public Wi-Fi connections you use should be considered vulnerable as well.  If you are going to do some online shopping from your phone, you may want to do it from the cellular network.  If you do connect to a Wi-Fi that could be exposed make sure you only transact on sites that are encrypted (URL starts with https:// or as soon as you connect, establish a VPN connection to secure any transactions or data traffic you may be using.