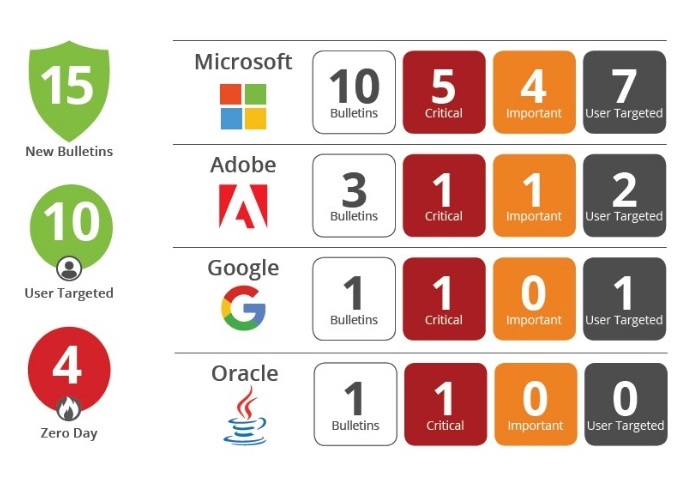 October Patch Tuesday will see some changes to how Microsoft and Adobe will be distributing updates.  There is a lot of buzz regarding Microsoft’s servicing changes to pre Windows 10 systems. October Patch Tuesday is the first release under this new servicing model, which we will talk about more in a moment.  There are a few changes for Adobe Flash Player starting this month that you will need to be aware of. We are expecting a Google Chrome release today and Oracle’s Quarterly CPU next week, so plan on updates for Java JRE and many other Oracle solutions.

Regarding Microsoft’s servicing model changes, Microsoft has basically consolidated all IE and OS bulletins into a single update. This will be served up in one of two ways: as a security only quality update or a security monthly quality rollup. The biggest difference between these is the security only is bundling each month’s security updates only. The rollup includes non-security fixes as well as being cumulative. I recently spoke with CSO Phil Richards about this change and he provided some good feedback as far as the challenges companies may face. In last week’s Patch Tuesday Forecast, I also talked about some recommendations on how best to choose between the security only and the rollup options.

Oracle’s Quarterly CPU is coming next week on the 18.  Oracle releases on the first month of each quarter on the Tuesday nearest to the 17, which typically falls the week after Patch Tuesday. Watch for an update next week for Java and many other Oracle products.

Google Chrome should be releasing today. The Dev channel for Chrome Desktop updated late last week which usually indicates a Chrome release on Patch Tuesday or soon after. With a Flash Player update, they will be releasing to support the latest plug-in, but likely will have some additional security fixes as well.

Let’s break down the more severe of these bulletins.

Looking at the infographic you would see that Microsoft has released 10 bulletins today — five of which are rated as critical — and there are four unique Zero Day exploits across five of the bulletins. Now there are 10 bulletins, but the actual number of deployable packages is less. There will be the security only or security rollup, which will bundle MS16-118, MS16-120, MS16-122, MS16-123, MS16-124, MS16-125 and MS16-126 together in a single installer. For systems where you have installed a newer version of .Net you will have the .Net Rollup. Skype, Lync, Office and Flash are separate updates yet. So you could have as many as seven packages to deliver to some endpoints, but most will be getting around five actual packages to test.

MS16-121 is an important update for Office. The bulletin resolves one vulnerability, which has been Exploited in the Wild (CVE-2016-7193).  An attacker could craft a file to send through email or by specially crafting web content designed to exploit the vulnerability. Users running with reduced privileges could reduce the impact if exploited.

MS16-122 is a critical update for Windows. The bulletin resolves one vulnerability. An attacker could exploit this vulnerability by convincing a user to open a specially crafted file from a webpage or an email message. The Outlook Preview Pane is an attack vector for this vulnerability. Users running with reduced privileges could reduce the impact if exploited.

MS16-126 is a moderate update for Windows. The bulletin resolves one vulnerability, which has been Exploited in the Wild (CVE-2016-3298). This is the same CVE ID as the Exploit in MS16-118 for Internet Explorer. To fully resolve the vulnerability, both MS16-118 and MS16-126 must be installed. For Windows Vista and Server 2008, this means installing two separate packages. For newer Oss, both will be included in the security only or security rollup package.

APSB16-32 is a priority one update for Adobe Flash Player. This update resolves 12 vulnerabilities. Many of the vulnerabilities are user targeted and, if exploited, could allow an attacker to take control of the affected system.

For more in depth analysis and conversation regarding this Patch Tuesday, join us for the Shavlik Patch Tuesday Webinar tomorrow morning.