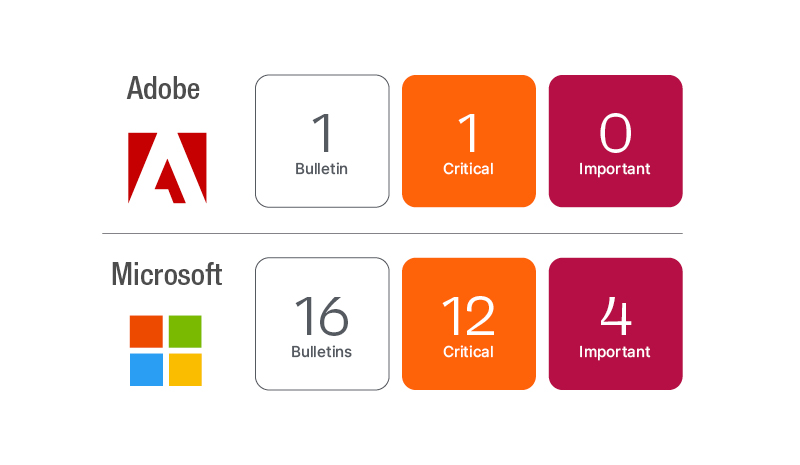 Microsoft Exchange Admins have had a rough stretch in the past few months starting with the zero day exploits targeted by HAFNIUM followed by the April Exchange update resolving four NSA discovered vulnerabilities, and with the May update we are seeing the first of several vulnerabilities that were showcased in Pwn2Own getting to resolution. CVE-2021-31207 is only rated as Moderate, but the Security Feature Bypass exploit was showcased prominently in the Pwn2Own contest and at some point details of the exploit will be published. At that point threat actors will be able to take advantage of the vulnerability if they have not already begun attempting to reverse engineer an exploit.

Adobe has released 12 updates for May Patch Tuesday. These updates resolve 42 unique CVEs, 16 of which are rated as critical and one is actively being exploited in targeted attacks (CVE-2021-28550). Adobe Acrobat and Reader (APSB21-29) is a priority 1 update indicating it resolves a vulnerability that is actively being exploited. The updates for Adobe Magento (APSB21-30) and Adobe Experience Manager (APSB21-15) are rated priority 2 by Adobe. The updates for Adobe InDesign, Illustrator, InCopy, Adobe Creative Cloud Desktop Application, Animate, and Medium are rated as priority 3, but do include Critical vulnerabilities. The remainder of Adobe’s releases are rated priority 3 and include updates for vulnerabilities rated as Important.

On a side topic, this month marks the final update for several Windows 10 and Server editions, so make sure you have updated any systems to newer branches to avoid a disruption in security update coverage come June. Windows 10 1803 and 1809 and Server 1909 all received their final update on May Patch Tuesday 2021.