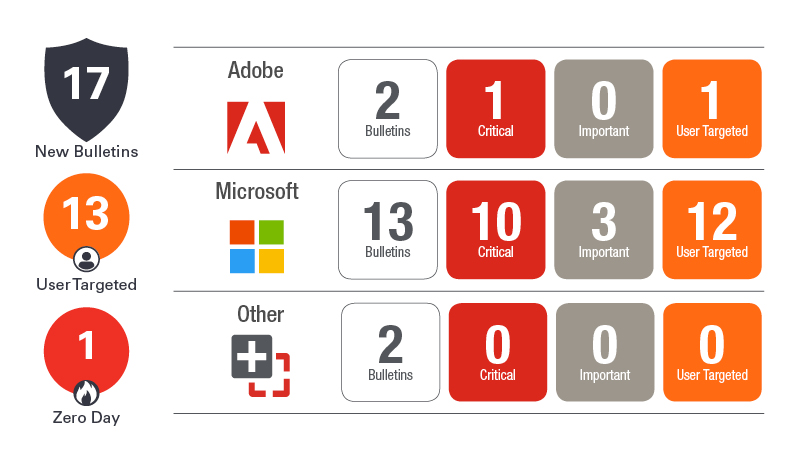 Most of the excitement may already have passed with Adobe’s Flash Player release on June 7th. The discovery of a Zero Day vulnerability (CVE-2018-5002) being exploited in the wild resulted in a Flash Player update (APSB18-19) which included the fix for the exploited vulnerability and three others.

Microsoft has released 12 updates resolving 49 unique vulnerabilities. The update affects the Windows OS, Office, SharePoint, Internet Explorer and Edge browsers. There is one publicly disclosed vulnerability this month. CVE-2018-8267 is a vulnerability in Microsoft’s Scripting Engine which affects all supported versions of Internet Explorer. This vulnerability could allow the attacker to execute arbitrary code in the context of the current user. Running as less than a full administrator would mitigate the impact if this vulnerability were to be exploited. This is also a user targeted vulnerability meaning an attacker need only convince the user to visit a specially crafted website designed to exploit the vulnerability. An attack would also be embedded into an ActiveX control marked “safe for initialization” in an application or Microsoft Office document that hosts the IE rendering engine. Compromised websites that accept user-provided content such as advertisements could also be an attack vector.

Microsoft has also updated the Meltdown and Spectre mitigation to mitigate against Spectre Variant 4 (CVE-2018-3639) vulnerabilities. This was the series of 8 additional Spectre vulnerabilities discovered a few weeks ago that allow for Speculative Store Bypass. Similar to the last round of Meltdown and Spectre fixes the guidance from Microsoft is to apply the OS updates, apply latest microcode\firmware updates, then turn on mitigation for Variant 4. They do warn about the possibility of performance impact once again.