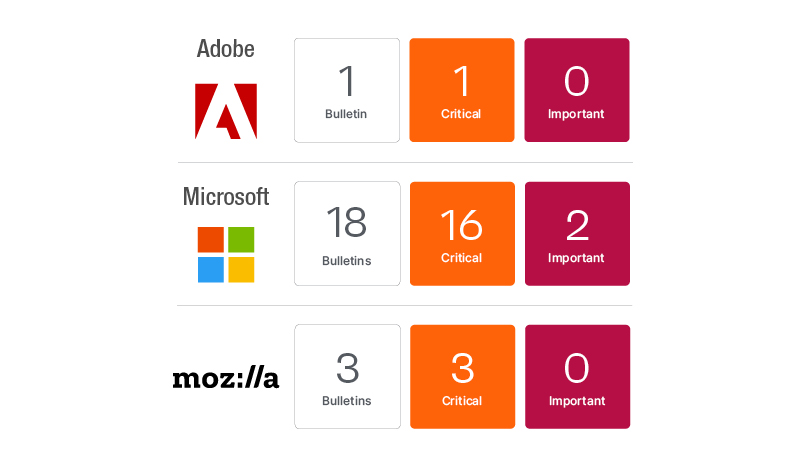 Get your snow shovels out, bundle up and prepare for Patch Tuesday January 2022! Sorry for my Minnesota winter humor there, but I felt it was a good metaphor for what to expect this month.

There is a healthy lineup of issues to investigate this month including Log4j cleanup activities continuing in many organizations, a script to fix a date value limitation in on-premises Microsoft Exchange Transport service that caused email to become stuck for many organizations, and security updates from Microsoft, Adobe, Mozilla and Oracle (releasing on January 18, 2022).

Log4j cleanup is still ongoing for many organizations

For most the question of if they have caught all possible instances of Log4j is really the biggest question. As I discussed in a blog post on Patch Tuesday December 2021 the Log4j vulnerabilities were not something you could resolve with a simple update. It is a messaging component built into a variety of web services and vendor applications. It was difficult to detect in many cases, so code scanners and network vulnerability scanners struggled to accurately identify exposure. Organizations that were able to respond quickly found that truly understanding their exposure required rolling up their sleeves. They quickly assessed their internal development teams for use of Log4j and their vendor risk management process to determine what vendors they were consuming solutions from and assessing each to determine if they were exposed. As an additional step, security teams also utilized a variety of custom scanners purpose-built to scan for the Log4j binaries. This is crucial given Log4j was buried many cases in a few layers of JAR files which was throwing many vulnerability scanners off. Here is the latest guidance on Log4j for vendors and affected organizations:

Microsoft Exchange administrators got a new year’s surprise as on-premises Exchange servers started experiencing email becoming stuck as queues ran into a date format issue in the Filtering Management Service. Guidance quickly became available on January 1, 2022 as email stuck in transport queues quickly got backed up. Initial guidance was to disable the antimalware service as a workaround to get email flowing again. Guidance was later updated with scripted and manual steps to stop the affected services and update the affected engine and restart services resolving the issue. If you still have the initial mitigation in place it is recommended to take the additional steps Microsoft has provided to implement the amupdate and restart the transport service.

Keep in mind the Oracle Quarterly CPU will be coming on Tuesday January 18, so don’t lose sight of that in your update schedules in the next few weeks.

Adobe has released 5 updates resolving a total of 41 CVEs, 22 of which are rated as Critical. The Acrobat and Reader update is rated as priority 2, with updates for Illustrator, Bridge, InCopy, and InDesign rated as priority 3.

Mozilla has released 3 updates resolving a total of 18 unique CVEs this month, 9 of which are rated as Critical. The updates affect Mozilla Thunderbird, Firefox and Firefox ESR and all three are rated as High severity.

Microsoft has resolved a Denial of Service vulnerability in Windows Event Tracing Discretionary Access Control List (CVE-2022-21839) affecting Windows 10 1809 and Server 2019 versions of the Windows OS. The DoS vulnerability does have a Proof-of-concept and has been confirmed.

Microsoft has resolved a Remote Code Execution vulnerability in Windows Security Center API (CVE-2022-21874) affecting Windows 10 and Server 2016 and later versions of the Windows OS. The vulnerability has been confirmed, but no proof-of-concept code is available.

Microsoft has resolved a Remote Code Execution vulnerability in Libarchive (CVE-2021-36976) affecting Windows 10 and Server 2019 and later versions of the Windows OS. The open source library includes additional fixes for vulnerabilities dating back to 2006.

Microsoft has resolved a Remote Code Execution vulnerability in Open Source Curl (CVE-2021-22947) affecting Windows 10 and Server 2019 and later versions of the Windows OS. The open source library includes additional fixes for vulnerabilities dating back to 2000.