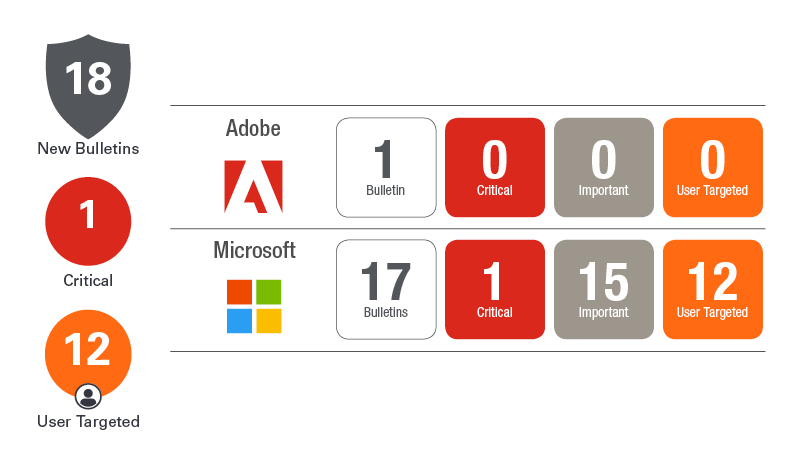 January Patch Tuesday looks like a mild one. Microsoft has released updates for the Windows operating system, Internet Explorer, Edge, Office, Sharepoint, .Net Framework and Exchange. Microsoft resolved a total of 47 unique vulnerabilities and most are only rated as Important. Only seven of the CVEs resolved are rated as Critical and those are all on Windows 10 and Server 2019 as well as Chakra Core and the Edge browser.

On the Microsoft side, the thing you should be concerned about is whether you addressed the Internet Explorer out-of-band that occurred in December. On December 19 Microsoft released an emergency patch to resolve a zero-day vulnerability in Internet Explorer’s scripting engine. The Jscript vulnerability (CVE-2018-8653) allows an attacker to leverage the scripting engine within IE by simply viewing a malicious website. Once successful, the attacker can gain control of the system with the user’s rights.

So if you did the December Patch Tuesday updates, but did not catch the out-of-band, you will want to ensure all of your Windows systems get either the January cumulative update or the IE update as quickly as possible.

Outside of Microsoft there isn’t a whole lot more going on just yet. Adobe released an update last week for Adobe Acrobat and Reader (APSB19-02),

which resolved two critical vulnerabilities. Adobe Flash Player released today but did NOT include any security updates. If you are up to December’s APSB18-42 release you should be set there.

January is Oracle’s quarterly CPU cycle so next week on the 15th you can expect all of your favorite Oracle software to receive some critical patch updates. I highly suggest you read up on the Java support changes going forward. Java SE 8 is receiving its last public update. After this one you would need to subscribe to Oracle’s update program for Java 8 or upgrade to Java 11 JDK. For more details see my writeup from last week’s Patch Tuesday Forecast.

On September 17, 2018 Oracle Announced Java SE 8 End of Public Updates set for January 2019. The upgrade path for Java SE 8 was previously to upgrade to Java SE 10, but that EOL’ed in late September 2018 as well. So the new path is to upgrade to Java JDK 11. Yes, JDK. Why? Because there really isn’t a separate JRE any longer and this is where many companies are currently left scratching their heads. The Java Runtime is no longer packaged separately.

In JDK 11 the software developers are supposed to package up only the necessary modules for their specific application using jlink or jmod. In short, this will change the way you distribute your Java applications. For many companies the details are still a bit foggy. As a patch administrator your biggest concerns should be: