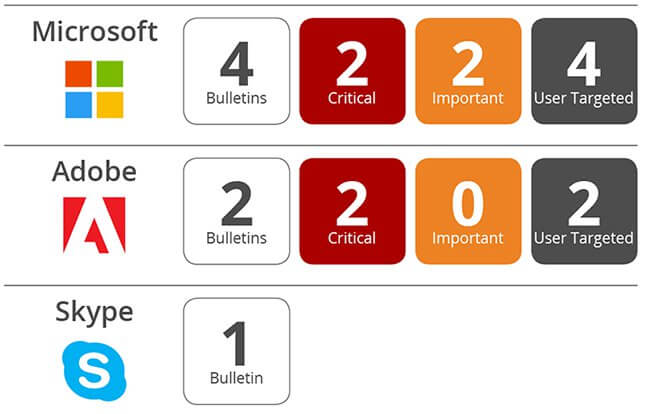 Adobe has released update APSB17-01 for Acrobat and Reader, keeping in line with the pattern of releasing an update every two to three months. This update includes 29 vulnerabilities, most of which allow for remote code execution. You will want to make sure this update is applied in a timely manner.

As expected, there is a Flash Player update. As always, when there is a Flash Player update, you need to make sure to update all instances of Flash on systems, meaning Flash plug-ins for IE, Chrome and Firefox as well. Some of these will auto update; others may take some prodding before they will update. This is why having a solution that can scan for all four variations is critical to make sure you have plugged all the vulnerabilities in your environment.

Microsoft has released a total of four bulletins, two of which are critical and publicaly disclosed. Microsoft is resolving 15 unique vulnerabilities this month, 12 of which come from the Adobe Flash update. It’s interesting to note that there is no rollup for Windows 8.1 or Server 2012 this month.

Other than Microsoft and Adobe, there are a few other updates available if you are using Foxit Reader, Skype, etc. Although there several of the Microsoft vulnerabilities have been publicaly disclosed, none of the them have been exploited and there are no zero days.

This could be the calm before the storm. We have not seen this light of a Patch Tuesday since January of 2014. Next month you should expect some adjustments and a heavier Patch Tuesday drop as Microsoft changes methodologies.

This is the last Patch Tuesday that Microsoft will be using security bulletins. After January 10, Microsoft will no longer be publishing traditional security bulletins as individual webpages, but instead will only be publishing security update information to the new Security Update Guide. I’m sure there are many questions about what this means and how it will affect everyone so, if you have not already seen the FAQ put together by Microsoft, I have provided a link here.

As always, we will be running our monthly Patch Tuesday webinar where we will go deeper into the bulletins released and recommendations to prioritize what updates need to be put in place sooner than others. Make sure to sign up for the January Patch Tuesday webinar to catch playbacks of previous months and get access to our infographics and presentations to give you the information you need going into your monthly maintenance.