February Patch Tuesday Round Up 2016 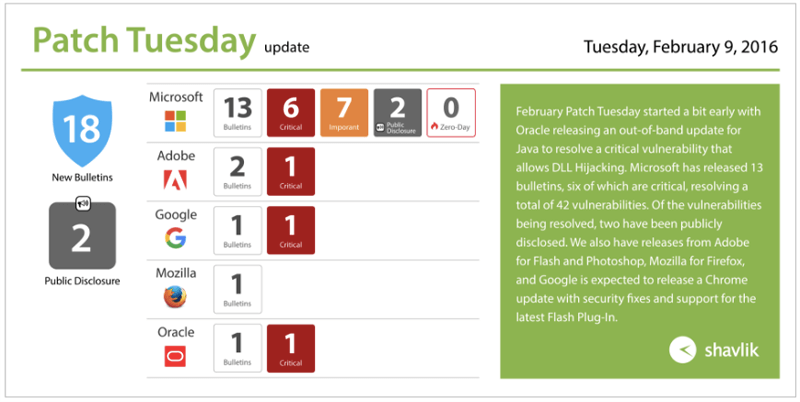 February's Patch Tuesday had a number of updates, continuing into this week with Microsoft releasing a number of non-security updates today. There are reports of a few issues out there that you will want to be aware of.

The first is from the RDP Security Update (MS16-017) from last week. There were documented known issues involving the update when applied to Windows 7 running RDP 8.0. Multiple reboots may be required in that case. Our internal testing found the same could occur on Windows 8.1.

Another issue that has been reported, and also made some headlines, is an update for Office 2013 (KB 3114717) that has reportedly been freezing 32-bit Word 2013 on Win 7, 8.1, 10. We have not yet added support for this update due to the issue. Microsoft has recommended removal for those who have already deployed it. A re-release should be coming soon, at which time Shavlik will add support for this update.

There was also a Mozilla Firefox security update late last week. This included one critical security fix. There is only one vulnerability resolved in the release, but probably one you want to roll-out sooner rather than later.