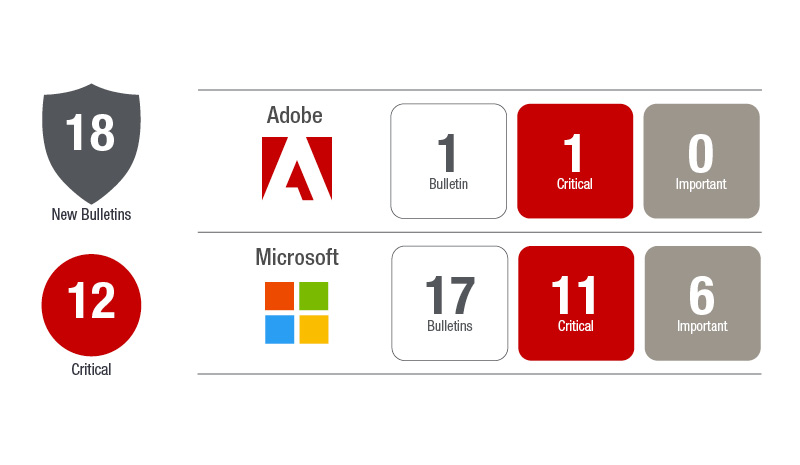 Second Patch Tuesday of 2021 is here and while the CVE counts are low there are a number of publicly disclosed and zero day vulnerabilities to be concerned about. Microsoft has fixed 56 new and re-released 2 vulnerabilities (CVEs) across the Windows Operating System, Office, .Net Framework, a host of OS components and system tools and development tools. Adobe has also released a priority 1 update for Adobe Acrobat and Reader resolving 23 CVEs, one of which is actively exploited (Zero Day).

Here is a quick view of the more important items to prioritize in your maintenance this month.

While this is a re-release from 2020, it warrants discussion. The Netlogon vulnerability (CVE-2020-1472) originally was resolved in August 2020. The update was planned to be a two-phase resolution. Initial update in August implemented the fix, but left it disabled. It also implemented auditing capabilities and guidance was provided for organizations to update and monitor the specific events to resolve any events that were legitimate then enable the enforcement when they were ready. February 2021 was defined as the date Microsoft would turn on enforcement. In September the vulnerability was exploited by threat actors and many organizations reacted quickly to enable enforcement. This re-release will turn on that enforcement for those who have not yet done so.

Adobe has resolved a Critical vulnerability in Adobe Acrobat and Reader (CVE-2021-21017) which has been exploited in limited attacks targeting Adobe Reader users on Windows systems. The vulnerability is a Heap-based Buffer Overflow that would allow the attacker to execute arbitrary code on the affected system. This vulnerability along with the 16 other Critical CVEs resolved in APSB21-09 should put Adobe Acrobat Reader into your priority bucket for remediation this month.

Microsoft has resolved a vulnerability (CVE-2021-1733) in Sysinternals PsExec which could allow an attacker to elevate their privileges. PsExec is a commonly used tool by IT organizations but is also equally commonly used by threat actors utilizing existing tools (Living off the land tactics).

Microsoft has resolved a pair of vulnerabilities in .Net Core (Remote Code Execution CVE-2021-26701) and .Net Core and Visual Studio (Denial of Service CVE-2021-1721) which have both been publicly disclosed. Development tools and the development supply chain are a rising concern and have been even before the recent Solarwinds breach. Development tools are updated regularly, and evaluation and update of these components should be part of every organization's DevSecOps process.

Microsoft has resolved an Information Disclosure vulnerability in DirectX (CVE-2021-24106) which affects Windows 10 and Server 2016 and newer systems. An attacker could gain access to uninitialized memory and what information may be stored there.

Microsoft has resolved an Elevation of Privilege vulnerability in Windows Installer (CVE-2021-1727). The vulnerability affects Windows 7 and Server 2008 and newer operating systems.

High Priority: Development tools and IT Tools need some attention. .Net Core and PsExec disclosures are a concern that should not go unaddressed. Because these development and IT tools do not follow the same update process as OS and Application updates it is important to review your DevOps processes and determine if you are able to detect and respond to updates for common dev components. For tools like PsExec it is important to understand your software inventory and where these tools are installed and ensure you can distribute updated versions as needed.