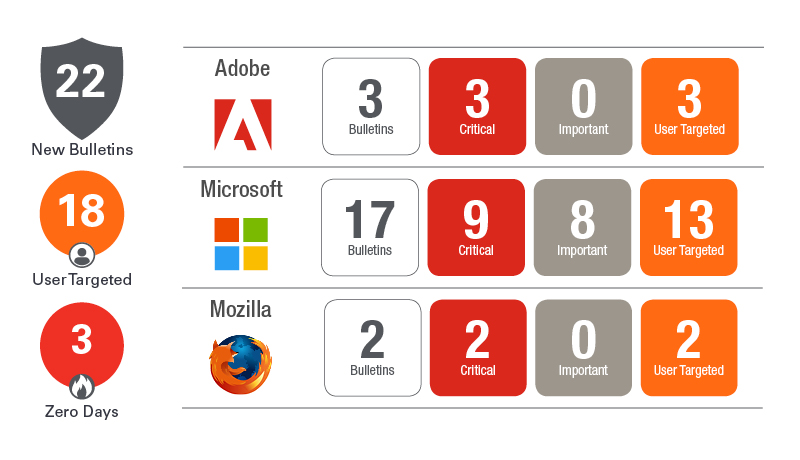 If you saw the Patch Tuesday forecast for December, the reality turned out to be fairly close to what I predicted. There are only a few surprises and additional concerns to note.

Microsoft resolves one zero-day vulnerability in the Windows kernel (CVE-2018-8611) which can allow an attacker to execute an Elevation-of-Privilege, enabling the culprit to run arbitrary code in kernel mode. The attacker would first have to log on to the system then run a specially crafted application to take control of the affected system. This vulnerability exists in all currently supported Windows operating systems from Windows 7 to Server 2019. Exploitation has been detected on older OSs already, but the Exploitability Index is rated as a 1 for Windows 10 and Server 2019.

Ensure you have deployed the latest Adobe Flash Player updates.

Leading up to Patch week Adobe has resolved two zero-day vulnerabilities in Flash Player. On 11/20 CVE-2018-15981 was resolved in APSB18-44. The vulnerability has been seen in live exploits by crafting a Flash .swf file to take advantage of the vulnerability and install malware.

On December 5 another Flash zero-day (CVE-2018-15982) was resolved  in APSB18-42, which has been observed in a widespread campaign that was exploited through ActiveX embedded in a Microsoft Office document.

Oracle CPU in January – Keep in mind Java SE 8 is reaching the end of public updates in January 2019. Java SE 11 is the next planned long-term support release. If you have not already started, that is the ideal migration path for long-term support. If you cannot move yet, Oracle will be making private updates available for an additional cost.