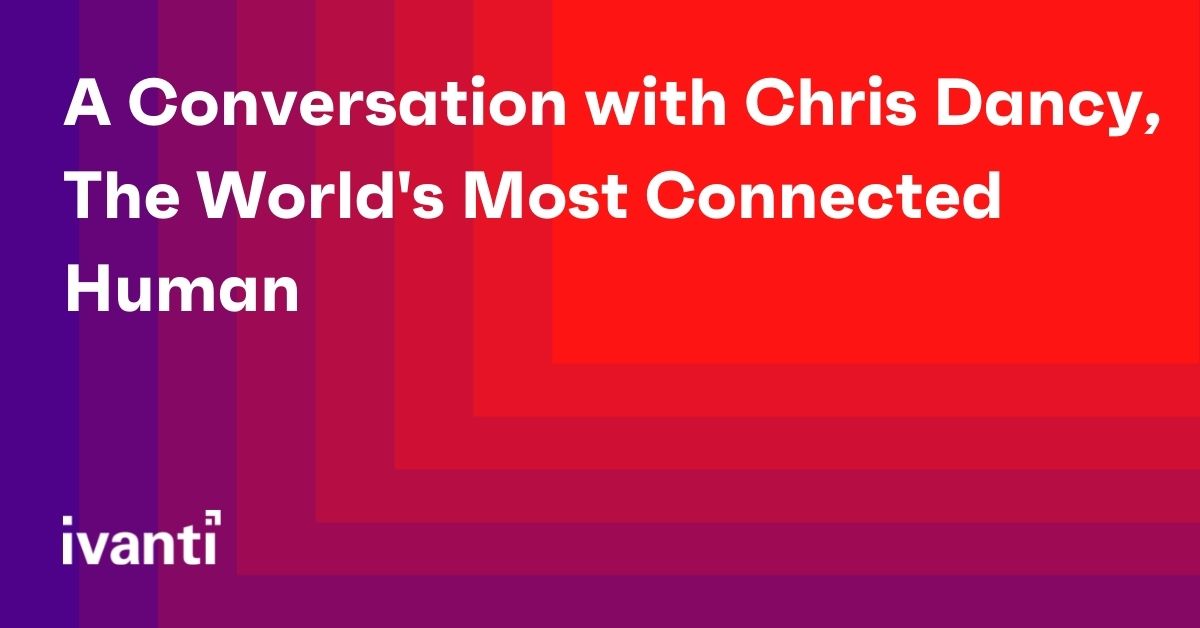 A Conversation with Chris Dancy, The World's Most Connected Human

It’s that time again and our first Ivanti Insights podcast episode in the month of May and we have an exciting episode for you. I’m joined by Ivanti’s Sr. Director, Product Management, Chris Goettl and our special guest, known as “The World’s Most Connected Human,” Chris Dancy.

For 25 years, Dancy has served in leadership within the technology and healthcare industries, specializing in the intersection of the two. Chris entered the public dialog concerning digital health as the media started to focus on wearable technology. He earned his moniker by utilizing up to 700 sensors, devices, applications, and services to track, analyze, and optimize his life--from his calorie intake to his spiritual well-being. This quantification enables him to see the connections of otherwise invisible data, resulting in dramatic upgrades to his health, productivity, and quality of life. Featured on Showtime’s Dark Net, the cover of Businessweek, interviewed by the Wall Street Journal, NPR, the BBC, Fox News and Wired.

In this episode I chatted with Chris2 and we unpacked Chris Dancy’s book Don’t Unplug: How Technology Saved My Life and Can Save Yours Too.

Now, when we say Dancy is known as the most connected man on earth, we aren’t talking about his LinkedIn connections. In fact, Dancy is a walking network of nodes, roughly 700 devices, sensors, applications, and services.

Did you know most people today have anywhere between five and 10,000 connections simultaneously? So the ultimate question is, do we or don’t we unplug?

Dancy shared with us in 2008 he got to a weight of 320 pounds, he was smoking two packs of cigarettes a day and his quality of life was at its lowest. Dancy says technology saved his life, but how?

Listen to the full episode of Ivanti Insights to find out.

Until next time, stay safe, be secure and keep smiling,

Ivanti Insights Episode 6: Beyond the Tip of the QR Code Iceberg

Ivanti Insights Episode 5: From DevOps to DevSecOps and the Game of Security Whack-a-Mole

Ivanti Insights Episode 4: Security Nirvana for Users and IT