Reevaluating Your Next Move: Are Native Apps the Answer?

There’s a lot going on in the world right now. The current healthcare crisis is making a lot of companies reconsider their next moves and forcing them to radically rethink how they operate and embrace technological investment in their warehouses and distribution centers.

Also, Windows-based handheld computers that have long been found in the hands of warehouse workers for picking, packing, loading, inventory, etc., are nearing the end of life. And many supply chain businesses are changing their operations on-the-fly to ensure their warehouses and distribution centers keep up with the demand. Plus, given the strict supply chain security requirements that exist today, warehouse managers have no choice but to migrate to modern handheld devices running on Android OS.

What Do You Prefer – Classic or Modern?

The question “How long is Terminal Emulation (TE) going to last?” keeps popping up every couple of years. The answer has remained about the same. Terminal Emulation is still a very popular interface for mobile access to enterprise applications. The speed, security, stability, ease-of-use, and maintenance of TE apps is still better than the experience of most who try to migrate to another platform. Is it likely to tail off eventually? Yes, but picking that date is very difficult.

Most migrations away from TE are heading toward web browser-based applications. We know this because most of them are using our Velocity TE or Web-browser client, especially those heading to standard platforms like SAP ITSmobile, SAP Fiori, Manhattan Scale, and open systems platforms. Plus, the newer, more intuitive modern screens make mobile devices easier to learn and train on for younger workers, while helping older workers make the transition at their own pace.

Ivanti Velocity is the framework to bring your existing TE or web apps to Android and Windows 10, with all the tools to help workers speed through retail and supply chain tasks.

Our rapid.ivanti.com migration and modernization platform also provides many companies the ability to migrate their old Windows green screens to Android OS,  as well as the option to turn their TE apps to HTML experience in minutes.

Web tools are a bit more of a security target than traditional TE platforms, but the number of developers with skills using them grows steadily. The attraction of web platforms is the ability to make a change to a host page, and not need to update every single device, and not have multiple versions running on the floor or in the field. Everyone knows how to use a web browser, so the platform doesn’t require much training. The focus turns to User Interface, so web pages and interfaces can be designed to be easy to use, reducing training times.

Many have tried to create thick-client apps or so-called native app interfaces, just as they did with Windows mobile over 10 years ago. Yes, making your own app sounds great! After all, which company’s engineers aren’t excited to become an app developer to create their own thick apps—until they discover the amount of work and investments required to keep up with Android OS updates and changes? Most of them return to a web browser interface because of the abundance of developers.

Here are some of the most common comments we hear about these native apps, and why many people come back to using Ivanti Velocity after their experiment:

Let’s face it. For over three decades, Ivanti Wavelink’s livelihood has been “native applications” and nMM for mobile devices. Operating systems are now changing to Android and Windows 10 and we have kept up with these changes. We could have told these companies what it takes to develop and maintain these native apps, if only they would have asked. We know every time Android changes, the manufacturer adds a scanner interface command, or the new device coming from some device manufacturer has a wrinkle in their dev APIs to make them special.

There are some very good reasons why global distribution centers and freight carriers use Ivanti Velocity TE and Web browser in their operations, as well as why global ERP and WMS companies. It is the most efficient and easiest way to deliver an application to mobile devices. 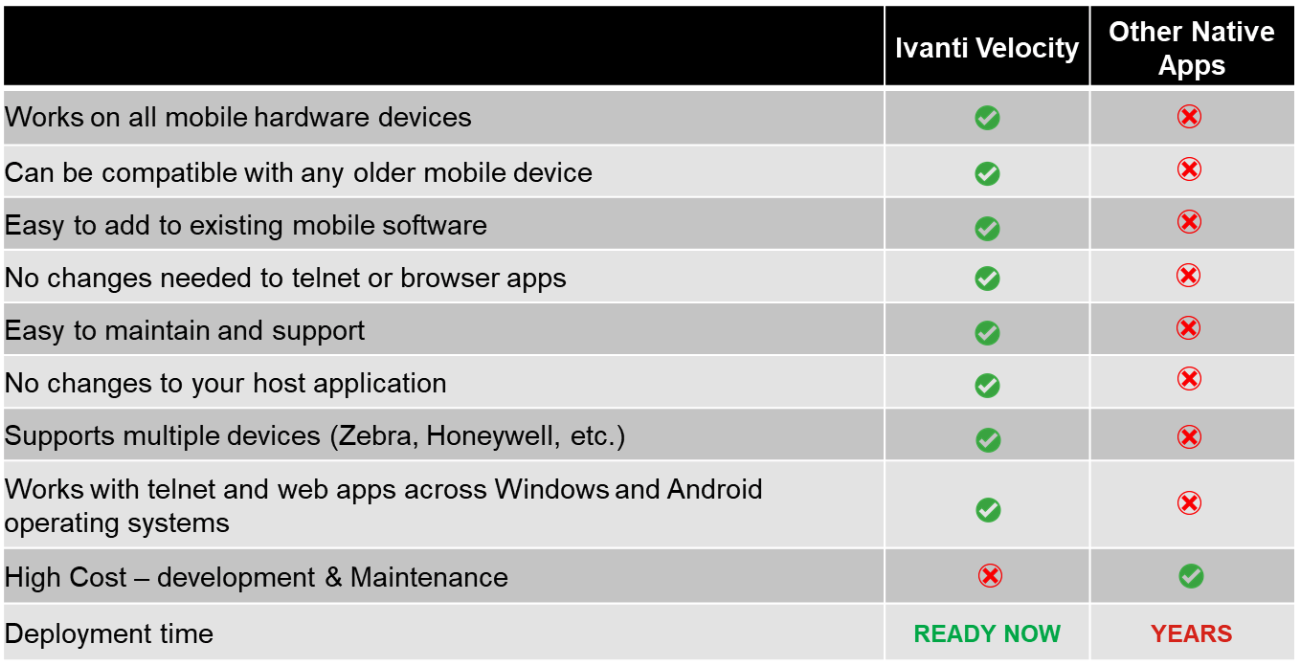 This current slowdown is making a lot of companies reevaluate their next moves, including Android. TE is a wise near-term solution bet, and web browser apps are a pretty close second. Those companies looking at the issues of native apps will use them as excuses to further delay the move. We have them covered either way they go.

Velocity is your pathway forward from legacy applications, without the risks of native apps. Request a custom demo here to get started on your path to increased warehouse efficiency.

Wearables Are Hot! And Zebra's WS50 Is No Exception with Velocity